A Review of "The Lengthening Shadow" 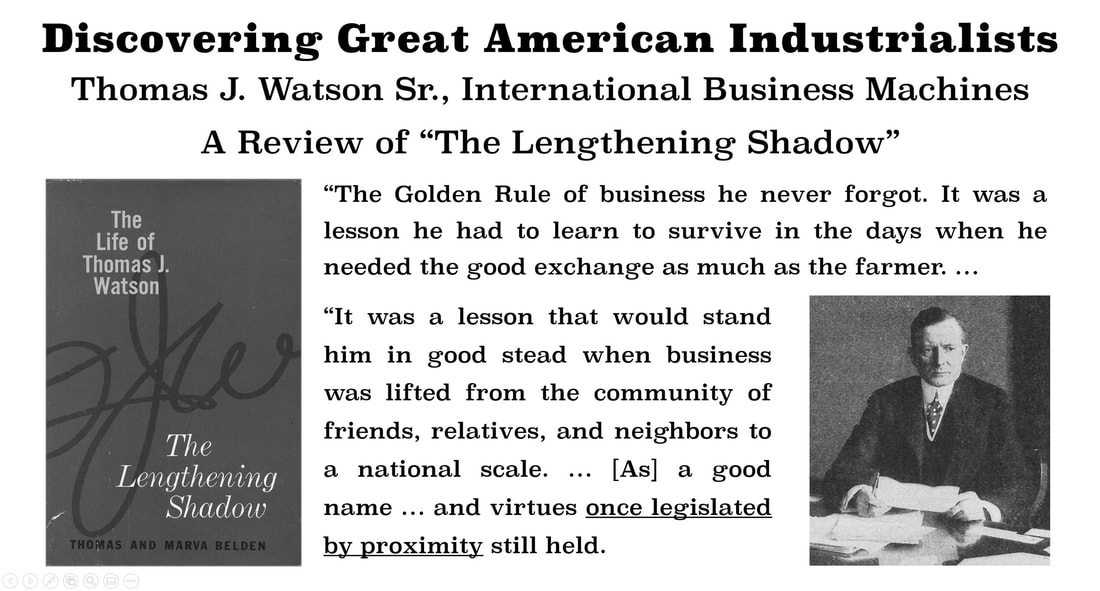 ​A Review of "The Lengthening Shadow" by Thomas and Marva Belden
Reviews of the Day: 1962
Selected Quotes from "The Lengthening Shadow"
On the Acceptance of the German Eagle in 1937 that Seems to Cause so much Angst with some People:
Within a year of the Berlin congress, where his hopes had run high, Watson found himself strongly protesting the German policy toward Jews, warning Hitler that his course was making trade with the United States almost  impossible.

​Because of his strong feelings about the issue, Watson wanted to return his German citation shortly after receiving it. When Secretary of State Hull advised him against that course of action, he gave up the idea until the spring of 1940. Then Hull refused advice, and Watson sent the medal back [emphasis added].
The Lengthening Shadow, "World Peace through World Trade"
Watson Practiced What He Preached: "Learn from Your Mistakes"
The incident of the German Eagle made Watson cautious. After the war the ambassador of a Communist country was on his way to Watson's house to confer a decoration on him when Watson stopped short to give the situation serious thought.

"The result is that I cannot accept this decoration because they are going to try to use my name in some way or other that will tie me up to the Communists, and people in my country will not understand it, and none of us will live long enough to be able to explain it to them,'' Watson told his advisers.

They pleaded with him to claim a diplomatic illness, but he refused to equivocate. "I am not going to practice any deceit," he said flatly. "I am going to do this without any apologies. I have very definite and sound reasons."
The Lengthening Shadow, "World Peace through World Trade"
On Watson Sr.'s Belief in Integrity in Business
"The corporation might replace the man and his buggy, but in the days of big business a good name would still be a good name, and virtues once legislated by proximity would still hold, and integrity remain the best drummer."
The Lengthening Shadow, "Birth of a Salesman"
This Author's Thoughts and Perceptions
​The Lengthening Shadow: The Life of Thomas J. Watson is a definitive resource about Watson Sr. and the early IBM. It is referenced by almost every other book about either Watson or IBM since its publication. It was written by Thomas Graham Belden and Marva Robins Belden and published in 1962—six years after Thomas J. Watson Sr.'s death.

​It is a wonderful read and I believe a balanced perspective on Watson Sr.'s life. No human being is perfect and any book that would try and make a man seem as such is probably coming up short—as we are all human beings. This book doesn't shy away from Watson Sr.'s uniqueness or peculiarities that made him human, but also offers great insights into a man living and building one of the world's first great corporations.

One weakness with the research contained in this book (and most any of the biographies since) is that the authors researched the files of many newspapers, but most of them were New York City papers; rarely are the Triple Cities area newspapers referenced in any documentation. It would be very hard to have a complete picture of Thomas J. Watson Sr. without consideration of the time he spent in his home-away-from-home in Endicott, New York.

These Triple City area newspapers documented almost every move of Watson Sr. from the time he set foot in Endicott with the C-T-R Company.

A greater weakness that I am finding every day in my research on Watson Sr., is the failure of the Beldens and every author since to recognize all the humanitarian work of Thomas J. Watson Sr. It is amazing that no one, in all their research, bothered to cover this aspect of his life that was paramount to him!

Hopefully, I will be able to resolve this weakness in my research and publications on Tom Watson, one of America's greatest humanitarians, educators, and business philosophers; he was cut from the same cloth as Herbert Hoover who saved millions of Belgians and 10's of millions of Europeans during and after World War I.

Betcha' most folks don't know these facts about either man.