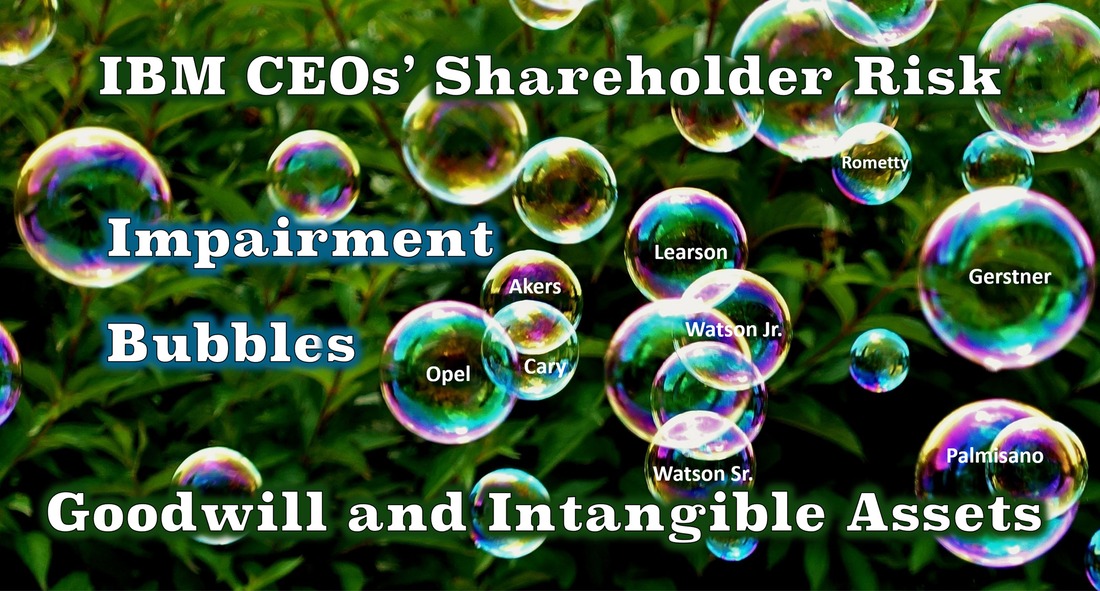 An intangible asset is something that, if dropped on your toe, doesn’t leave a mark. It is ethereal, and its value is open to  personal interpretation, imagination, and creative thinking.

For the purposes of this article, intangible assets are presented in two ways: first, the goodwill that arises directly from an acquisition; and second, all other intangible assets—patents, brand image, customer relations, non-binding contracts, strategic alliances, or others. Goodwill is the difference between the full amount paid for an acquisition less all other intangible and tangible assets.
IBM Chief Executive Officers' Yearly Goodwill
In 1981, when Warren Buffett discussed some of his failed acquisitions with shareholders, he chalked it up to occasionally buying “toads at bargain prices … clearly our kisses fell flat.” When talking about some of his successes, he said, “We have done well with a couple of princes … at least our kisses didn’t turn them into toads.”
To extend Warren Buffett’s toad-kissing acquisition analogy, IBM has learned from watching its competition that it is better to be standing knee-deep in a multitude of small, croaking toads than to invest in one large bullfrog with a bullhorn. HP  spent $13.9 billion for EDS and $10.3 billion for Autonomy, and Microsoft paid $7.2 billion for Nokia and $6.3 billion for aQuantive, only to be forced to reverse these transactions and take goodwill impairments of $8 billion, $8.8 billion, $7.6  billion, and $6.2 billion, respectively. These were large, highly visible acquisition failures.

IBM’s strategy has been to avoid kissing bullfrogs and instead act as a princess—smooching a multitude of lesser toad-princes. Through 2020, it had spent $88 billion on 192 acquisitions, for an average expenditure of approximately $280 million (without Red Hat which broke the curve). This is a significant number of small toads, and when one croaks—rather than transforming—it goes unnoticed by shareholders, consultants, and the press.

In 2019, Ginni Rometty kissed a bullfrog to pass on to her successors: Red Hat. Its purchase resulted in the addition of $23.1 billion in goodwill and $13.5 billion in other intangible assets. IBM paid $3 million per employee and goodwill is now almost 40% of the corporation’s total assets, while intangible assets have risen to almost 50%.

It will be interesting to see how Arvind Krishna handles the bullfrog with its bullhorn:

Undoubtedly with IBM's Principles of Trust and Transparency.
Summary of IBM CEO Yearly Goodwill
At a Glance: Examining a Century of IBM Goodwill

Facts worthy of consideration: Fifty percent of IBM's total assets are now "intangibles." The "James (Jim) Whitehurst" intangible left the building. How many of the other Red Hat "intangibles"—human assets at $3 million a person—are heading for the exits?

Facts worthy of consideration: Two decades, 192 acquisitions, $88 billion spent with $60 billion in goodwill still on the books and no goodwill impairments. Even the 20th Century IBM was never that good: think ROLM, Intel and WorldCom. It defies logic. It isn't ethical. It isn't the act of a leadership that claims to be trustworthy and transparent.

Facts worth noting: There was a minor recognition of goodwill (less than 1% of total assets in the 1960s) with the acquisition of Science Research Associates, one that was amortized over the next few years. Goodwill was zero in all other years, even though IBM invested $5 billion in System/360 research and development (R&D), because R&D expenditures are handled differently from money spent on an acquisition. Instead, IBM’s tangible assets grew by more than fourteen times — $624 million to $9.6 billion. Shareholder risk was well controlled during this time frame.

The ROLM Corporation acquisition was a dismal failure, but by the time this was acknowledged it had been amortized (written off over its expected useful lifetime). Under today’s rules of goodwill accounting, IBM would have not amortized the ROLM acquisition; rather, it would have carried the goodwill until it was acknowledged as a failure, and then taken a one-time goodwill impairment.

​Under today’s accounting rules, the goodwill from the Lotus and Tivoli acquisitions, rather than being amortized, would most likely still be on the books.

Watson Jr. wrote off the last bit of goodwill after his father's death.
Return to "Who Was ibm's greatest ceo?" Home Page