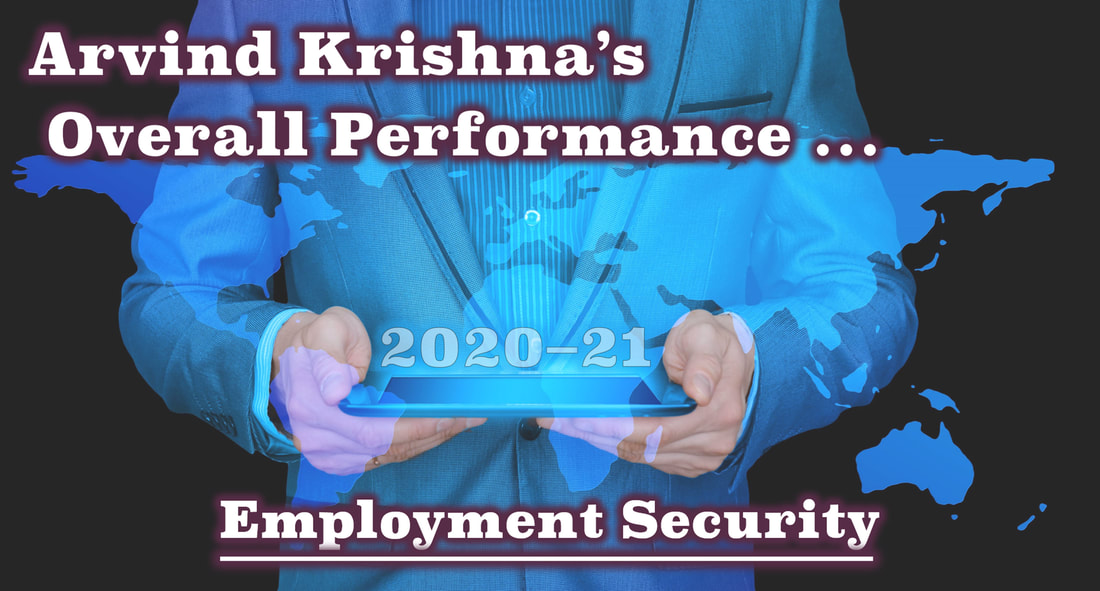 Arvind Krishna: IBM 2020-21 Employment Security
Too many authors, historians, and corporate executives do not understand the difference between "job" security and "employment" security. The 20th Century IBM absolutely never promised "job" security. An individual's "job" was only secure as long as they performed. Opportunities were always available to try a new job, but fail at a "new job" and a person would not necessarily be fired, just returned to their previous job where they had performed.

When executives failed, this job change was sometimes called a "lateral move." This, though, gave an individual a chance to recover: to once again perform at a job they were good at and, given some time, more maturity, and additional training, to try again or to try another job that was more suited to their skills. It is easy to understand the critical nature of addressing poor performance, especially at the executive level. Tom Watson Sr. and Jr. both practiced "lateral moves" with their executives to address poor performance.

As for employees, first-line managers were pushed to their limits to determine if a person in a particular job was failing because of desire or ability. If it was desire, management was expected to create an environment that was conducive to support or inspire employee self-motivation. If it was ability, management was expected to put training in place or consider moving the individual to an area where their abilities would be the best match for a job.

This was a heavy burden on first-line management, but it was part of the management "job." If a person couldn't do this particular job, they could expect to be removed from management and moved back to where they had once performed. Peter E. Greulich covers a time when he was given such an ultimatum by his Administration manager in "A View from Beneath the Dancing Elephant."

If an employee had the desire and the ability to perform, and they performed in their job they were secure in their "employment." If a particular type of "job" ended, they could expect to be offered another job (yes, possibly in another part of the country) and retrained if necessary, but they were again expected to perform to the highest standards in the new job. If an employee did not desire to work at the company or lacked the ability to perform . . . most of the time they would leave of their own volition because few are truly happy in a job they didn't desire to do and/or have the ability to perform. There were always the few, though, that had to be fired. This too was part of the management "job."

These concepts were the foundation for building and maintaining a "tradition" of full employment. It is a common misperception that IBM had a "policy" of full employment. Procter and Gamble had such a "policy." IBM never did. But it was one of the company's strongest of traditions because it was based on the employees' trust that management would do everything possible before considering the "nuclear options" of layoffs, right-sizing, resource actions, or workforce rebalancing.

In the 21st Century, IBM is practicing "employment insecurity." It doesn't matter what job or how well a person performs in that job, layoffs, right-sizing, resource actions, or workforce rebalancing threatens "employment" security. An instance of how IBM's most profitable division with some of the highest-performing individuals in the corporation were impacted by a resource action is available on this website: [Read: How an R.A. Day Kills Productivity].

Let's take a look at Arvind's performance in this area.
Information in the following charts is from JUST Capital's 2022 Overall Rankings information, unless otherwise note.
​Evaluating Arvind Krishna's First-Year Employment Security
​How has Arvind Krishna performed in the area of employment security?
Invests in worker development:​ [changes from 2020 to 2021]
I can't imagine too many U.S. employees that wouldn't support JUST Capital tracking layoffs and make it a major measurement as it did once in 2021. This only seems so . . .  JUST.
After taking the chief executive job in April, it only took Arvind Krishna a few months to announce employment cuts in the United States and by the end of 2020 he put in place a major shift of IBM's workforce out of Europe and Israel. Workforce reduction expenses that had averaged $487 million from 2005 to 2019 doubled to $956 million in 2020 and $752 million in 2021.

The corner offices' failure to acknowledge this single fact explains its troubling inability to transform.
* It is important to note that "job stability" was removed from the "Workforce Investment & Training" category in which IBM the year previously was ranked 546th. [See Footnote #1: Image provided]
Probably one of the most ironic statements in IBM's 2021 Annual report considering JUST Capital's ranking of IBM in the area of "Diversity, Equity & Inclusion" as 403rd across all industries and 7th in the Computer Services Industry with only twenty companies, is that they wrote the following after noting the corporation's progress on diversity and inclusion: "These efforts—and others—were recently recognized by JUST Capital, which named IBM the most just company in our industry."

Arvind Krishna and his staff, like many other researchers and analysts, just didn't look into the details. As we say in Texas, "The devil's in the details," and this award might have been better mentioned in an area in which IBM overachieved, not underachieved.

Who researches the details behind these corporate awards [Read: Challenging Forbes' 2020 World's Best Employer List]?
Arvind Krishna's Employment Security by the Numbers
* A complementary employee (with an "e" not an "i") ​came into existence during the IBM Crisis of 1992-93. It is defined in IBM's 2021 Annual Report as: "The complementary workforce is an approximation of equivalent full-time employees hired under temporary, part-time and limited-term employment arrangements to meet specific business needs in a flexible and cost-effective manner."

Being of service or caring about stakeholders other than customers—especially when it concerns employees, is sometimes called paternalism. When Watson Jr. talked about employment security, he did not view it as paternalistic but instead as a means of increasing employee loyalty, goodwill, and diligence on the job. These character traits in an employee improved an employee's productivity. It was just a good business practice.

Watson Sr. summarized best this father-and-son view of paternalism and employment security when he told his banking peers, “In attempting to counsel or advise those whom we employ, we must not adopt a paternal attitude. … When independent thought and action should be the order of the day, employees resent an attitude of paternalism. It is a well-known fact, however, that an employee’s efficiency suffers if his mind is ill at ease, and that worry over financial troubles is one of the most powerful sources for the destruction of mental peace.”