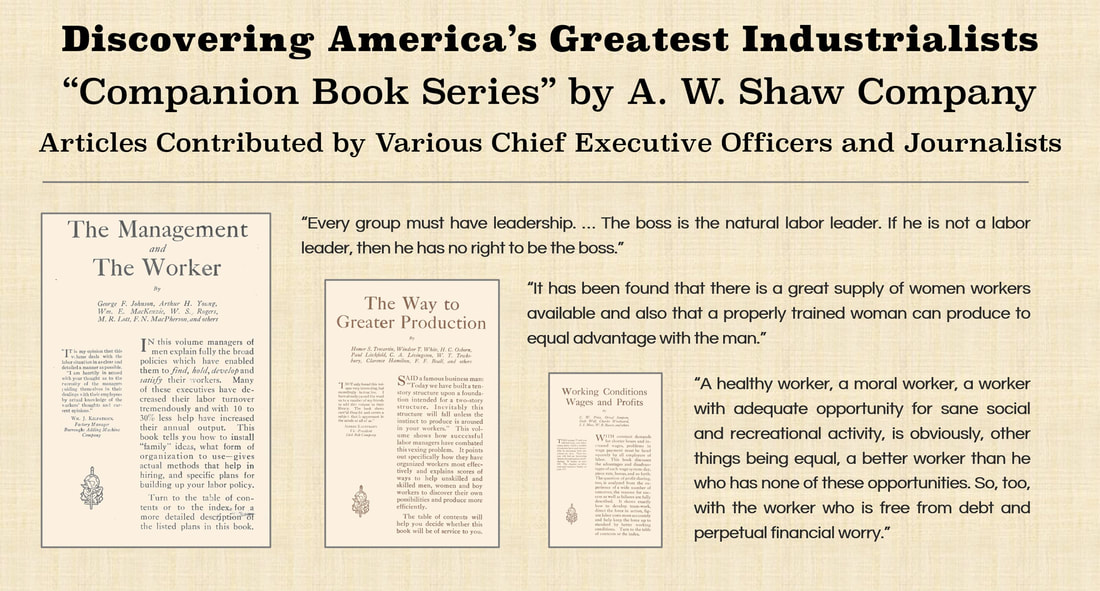 “This book and its two companion volumes are designed to present a complete picture of the common problems that arise in handling human relations in any business, large or small. … the only satisfactory treatment, today, seems to be an analysis of methods actually being used  and proving successful.”

"The Management and the Worker,"
​A. W. Shaw Company, 1920
A Review of A. W. Shaw's Three Companion Volumes
Reviews of the Day: 1920
​There were no reviews found for this series of books.
Selected Excerpts from:
“Not every man is qualified to administer human relationships in a business. Not every employer is so qualified. Yet this is one of the last facts that the typical employer will admit. … If he is the man for the job, there are few, if any, other tasks that he can take under his own wing with such profit.

​"If he is not, there are few places where he can do equal harm so quickly.”
“Many a man in charge of others snarls at his employees, simply because the man who held the job before him, and under whom he was trained, had cultivated the fine art of snarling. An equally pertinent observation is that the pleasant-mannered employee usually reflects the attitude of a similarly pleasant-mannered boss. Habits are catching. An executive’s daily attitude toward those in his employ becomes a habit. And the sum total of the relations of all the executives in all their relations with employees is the labor policy [should we say culture?] of that business in action.”
“Every group must have leadership. … The boss is the natural labor leader. If he is not a labor leader, then he has no right to be the boss.”
​“Without customer good will, a business life goes out in the twinkling of an eye. Without employee good will, on the other hand, adequate production and reasonable costs are impossible.”
​“Men do not work only for wages. The payment of just wages discharges the primary obligation, but that alone does not build good will or insure the employer of the utmost return in the way of production. It has been the frequent experience of employers that high wages do not hold men in jobs where the man cannot feel a personal satisfaction and pride in his work or see that his efforts are appreciated.”
​“The salary of the President of the United States is but a part of his wage. There may be many other returns on his effort, such as a feeling of pride in the dignity of the position and the opportunity for distinguished service. … Just as truly, … the weekly pay envelop of a Pittsburgh mechanic may be but a part of his wage. The opportunity for practicing his trade pleasantly, the desirable character of his companions in the shop, and other considerations, may help materially to make up the remainder of the return on his effort. A manager does himself and his men an injustice if he allows himself to lose sight of the fact that other things than money are involved in any bargain between employer and employee.”
This Author’s Thoughts on this A. W. Shaw Book Collection
​This is a set of three books published by the A. W. Shaw Company. The three volumes are The Way to Greater Production, The Management and the Worker, and Working Conditions, Wages and Profits. Profit sharing, stock options and other uplifting human relations practices came into being in the late 19th and early 20th Centuries.

​They are documented in this set of books.

An A. W. Shaw Company publication from 1920 with contributions by major industrialists of the day.
Contributors to this volume were peers and predecessors of Thomas J. Watson Sr. and included one of his best friends, George F. Johnson of Endicott Johnson Company. George M. Verity of Armco was one of the men chosen for the Editorial Advisory Board for these books. ​Links are provided to his biography True Steel and one of his articles on “Success and Character“ on this website.

Since "management" was a new concept in these early 20th Century businesses which were evolving from entrepreneurial proprietorships into multinational corporations, it is fascinating to read how the "owners" and new "management teams" of the day struggled with maintaining peace in their organizations between capital, labor and management.

These entrepreneurs were intuitive, sophisticated and experimental. They attempted to understand their workers’ needs, and were very creative in the avenues they explored to maintain harmony within their organizations.

The purpose of this set of books is revealed in this statement:

“This book and its two companion volumes are designed to present a complete picture of the common problems that arise in handling human relations in any business, large or small. … the only satisfactory treatment, today, seems to be an analysis of methods actually being used  and proving successful.”

​The Management and the Worker, 1920
As this excerpt suggests, this series was produced as a set of management best practices: "methods actually being used and proving successful." Although, the “how” contained in the books is dated (such as providing housing, sanitation, and safety for workers), understanding “why” these industrialists were attempting such new practices is the true gem hidden away between the covers. Their relevance is in understanding the "why" of each best practice.

Consider what George F. Johnson wrote in The Management and the Worker:

"The times have changed, the ways of doing work have changed, but the essential attributes of human nature have not changed. … The natural leader is the head of the business. … If the employer is not a natural labor leader, then the working people will secure other leaders."

Yes, machines and methods constantly change and, appropriately, they should adapt quickly; but human nature evolves over decades, centuries and millennia, and it is best to remember that when thinking that the past is irrelevant. In this respect, these books are priceless. ​I hope you find the quotes from these books as fascinating as I do.

​Our 20th Century industrialist predecessors were wise men and women looking for the best way to make their economic system sustainable in its growth.
​
That included doing what was right for the business and its employees, shareholders, and supportive societies.
Return to A. W. Shaw's Bibliography Home Page