An Analysis of the Kyndryl (NewCo) Divestiture 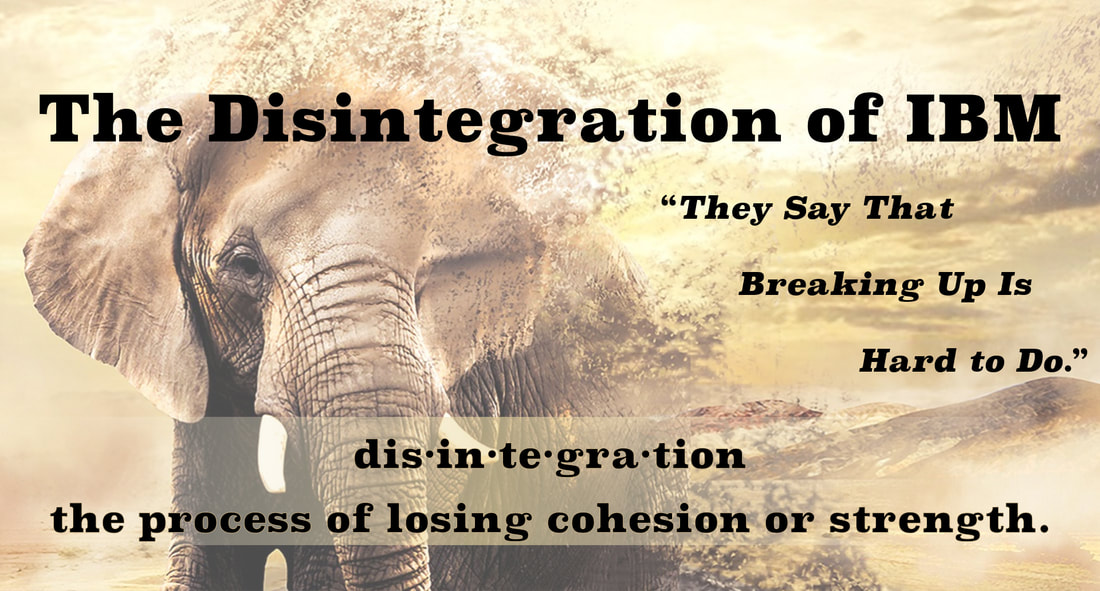 Akers [IBM's CEO in 1992] said he had been pondering a plan to split IBM into more manageable pieces. But first, the 57-year-old chief executive hired consultants and set up an internal group of executives to see what they thought. The conclusions were almost unanimous: Break Big Blue into Baby Blues.

Bart Ziegler, Associated Press, Minneapolis Star Tribune, September 8, 1992
I was in an IBM sales organization in 1992. Thank goodness someone was awake on the board of directors because the consultants and internal group of executives were wrong. ​I wonder what we need to do to wake up IBM's current board?

If they need a history book: THINK Again: The Rometty Edition!

​- Peter E.
​What Most Analysts Are Missing In the IBM Breakup: Employee Engagement
​​​​IBM’s Board of Directors Is Practicing the Definition of Insanity

​The definition of insanity is repeating the same actions over and over again and expecting different results.

​​Evidently it wasn’t Einstein, but whoever said it was brilliant!
IBM hasn’t had management processes in place during the 21st Century that produces the leadership talent necessary to turn around an organization. The list of acquisition and divestiture missteps is long: the disk drive business, the PC Company, the x86-Server Division, WebSphere, Lotus, BigFix, Kyndryl or a host of others—most of the 207 organizations acquired by IBM (as of 2021) were highly successful organizations before their acquisition. Unfortunately, IBM's twenty-first-century business philosophies, strategies and processes have promoted individuals into positions of authority who are “jettison-now managers” not “turn-around leaders.”
​
It appears from this recent decision that Arvind Krishna is a member of the former not the latter, as he repeats what Palmisano and Rometty have been doing for decades. Apparently Wall Street, for now, is buying what he is selling—that, this time around, things will be different: revenues and profitability will rise, long-term shareholders will see market beating returns, customers will be delivered superior products that will make them more competitive, and employees can expect higher employment security.

Unfortunately, the history of these practices and their returns for IBM’s stakeholders suggest otherwise.
​​IBM Analysts Are Ignoring these Two, Long-Term Trends
These are the two, two-decade-long charts that document the long-term problem at IBM: employee productivity, or as some write, the engagement, passion and enthusiasm employees have for their work. Sales productivity at IBM flattened in 1995 after climbing ever-onward throughout the entire 20th Century. It started its long-term, ever-downward decline in 1999 during Louis V. Gerstner’s tenure (1993-2001). Confusing some, sales productivity even declined during a time of expanding revenues that spanned the length of Samuel J. Palmisano’s tenure (2002-2011). It continued its fall during Virginia M. (Ginni) Rometty’s executive officer career (2012-2019). It is continuing through Arvind Krishna's tenure.

This chart should scare long-term investors and wake up those analysts who make their money off of valuable insights and advice based on corporate performance rather than publications driven by advertising revenues or performers with “lightening round” performances that are more show than substance.​

These non-business-first practices masked a real decline in profit “productivity” until 2013. This is when international workforce rebalancing hit the proverbial brick wall and ran short of highly-paid but highly-productive positions in the United States and Europe to outsource to lower-wage but lower-productivity locations: essentially, the workforce-rebalancing, outsourcing, profit-producing hare was finally overtaken and surpassed by the sales and profit productivity tortoises which started exacting their revenge.
​​Can We See into the Future?
The day that this divorce was announced every IBMer went on hold thinking, “What does this mean for me and my family?”

​Yes, even the Red Hat employees paused to evaluate this announcement, and these individuals were—before the acquisition—achieving sales and profit productivity performances that were 23.7% and 48.9% higher than IBM’s, respectively. This internalized question was asked within the context of IBM’s two-decades-long human resource practices that constantly threaten, even the highest-performing employees’ employment security. Every 21st Century IBM employee knows from experience that “performance doesn’t matter when it comes to employment security.” It is a matter of wrong place, wrong time or even wrong age group.

As Gallup has shown for decades, employee engagement matters—no matter the employees age. So, although no one can see into the future, looking at the impact of IBM’s past human resource practices, it would be a strong, well-placed bet that Arvind Krishna’s announcement will drive both sales and profit productivity further downward.

But then again, no one can see the future can they? Nope, but what about exhibiting some vision to pierce the future?

If a young man is to get ahead in business … vision is necessary—vision which pierces the future.

No one, it is true, can look ahead and foretell with unfailing accuracy what the future will bring, but that is not necessary. For just as historians judge the past in the light of the present, we can envision the future out of our knowledge of what has taken place in the past, and what is going on about us now. ​

​Tom Watson, Interview with Merryle Rukeyser, The Review, 1937
If only IBM’s Board of Directors would “envision” IBM’s future with a knowledge of what has taken place over the past two decades—even the past eight years—and consider what is “going on” about them now. It is probably too much to ask of someone making upwards of $500,000 per year warming a director’s chair, right?

So, here’s my opinion. Just be careful with any investment in IBM as it is worth what you are paying for it . . .

Priceless!
​Sales and Profit Productivity Will Most Likely Continue Their Fall
A thinking individual, as a royal dissenter, has to question why the board of directors, which should be watching out for the shareholders’ best interests, allowed the previous chief executive to lose $56 on a shareholders’ $1,000 eight-year investment (including dividends), and is now allowing her successor to continue her same practices. IBM executives and managers, and the members of the corporation’s board of directors are not royal dissenters, and the productivity decline of the last two decades is the symptom of an on-going problem without resolution: the loss of employee engagement, passion and enthusiasm for their work is causing a corporate disintegration—the loss of corporate strength and cohesion.

I wrote about Arvind Krishna’s First 100 Days. These decisions and his first-year performance continue to reinforce that he is cut from the same cloth as Palmisano and Rometty. Even Louis V. Gerstner, who I position in my book as a Shakespearean King, understood that breaking up IBM was to destroy its greatest strength.

Unfortunately, Palmisano and Rometty implemented an even more extreme strategy than the one Gerstner stopped in 1993: John F. Akers’ “Baby Blue’s Strategy.” Overall, Akers presided over a 70% decline in the corporation’s market value.

The chart below estimates what IBM's share price would have been if the corporation's market value had kept pace with inflation from 1999 to 2021 and IBM's share buybacks (repurchases) were still in place:

Louis V. Gerstner considered market value one of his investors most important measurements. Too bad the board of directors abandoned the measurement.

Cheers from a royal dissenter.