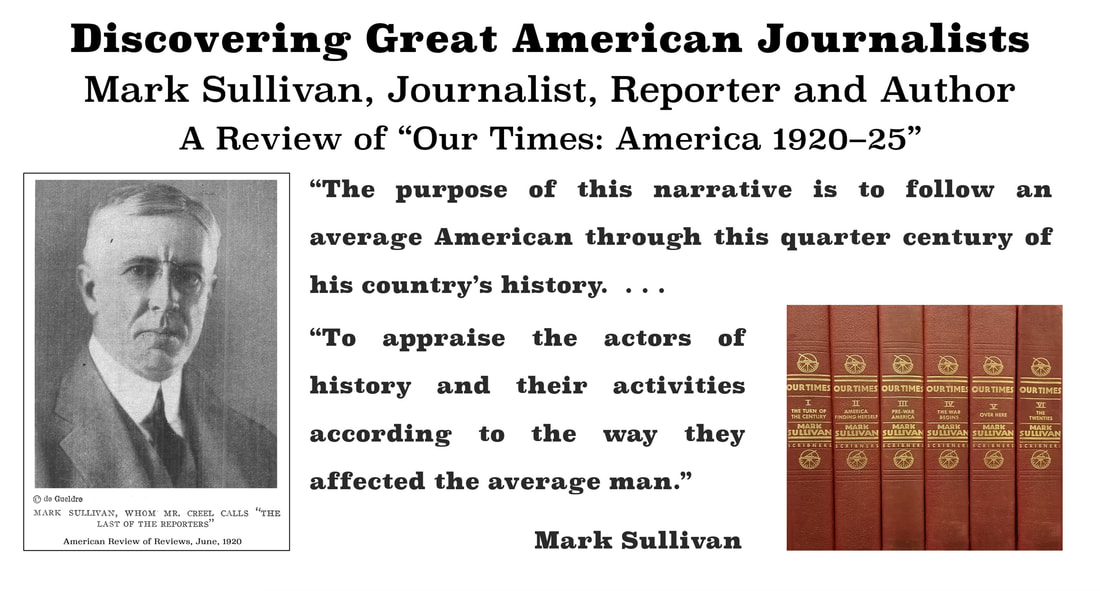 “The purpose of this narrative [Our Times: America 1900-1925] is to follow an average American through this quarter century of his country’s history, to re-create the flow of the days as he saw them, to picture events in terms of their influence on him, his daily life and ultimate destiny.

​"The aim is to appraise the actors of history and their activities according to the way they affected the average man, the way he felt about them, the ways in which he was influenced by his leaders, and in which he influenced them.

“The period aimed to be treated is the first quarter of the twentieth century in America, from the beginning of 1900 to the end of 1925.”
Mark Sullivan, "Our Times"
A Review of "Our Times: America 1900–1925" by Mark Sullivan
​Reviews of the Day: 1926–35
Volumes I through VI were published in 1926, 1927, 1930, 1932, 1933, and 1935, respectively
​David J. Donnan, The Helena Independent-Record, 1927
Volume III – 1930​: These volumes, and those to follow, will soon become the most authoritative sources of information as to the kind and sort of a people we were. … They also preserve those everyday incidentals which in the aggregate constitute a larger share of national life than the doings of governmental officials or the maneuvers of the great captains of industry.  … It is one of the very few reference books of great value that are also readable, for the gifted author has told the story in his customary fascinating manner.
​The Cincinnati Enquirer, 1930
Volume IV – 1932​: It is an impressive panorama, though this reviewer is inclined to quarrel with Sullivan on many of his dogmatic assumptions. He traces the course of American life admirably, but when he assumes to criticize, his judgment frequently seems out of kilter.
​H. Allen Smith, The Chillicothe (Missouri) Constitution, 1932
Volume V – ​1933: Mr. Sullivan’s fifth volume … measures up well to the preceding four. … The whole five volumes are worth preserving and handing down to the grandchildren.
​T. M. Pridgen, The Charlotte News, 1933
​​Volume VI – 1935​: Like previous issues in the series, this volume is good political history. Beyond that it conveys a fair impression of social currents of the time. Mr. Sullivan will be consulted by historians of the future.
​​The Philadelphia Inquirer, 1935
​Insights from "Our Times: America 1900–1925"
This is a short excerpt of the changes that took place from 1900 to 1925. A laundry list of what was in 1925 that was not in 1920. These are the changes early Americans experienced in the first quarter of the 20th century! This is the theme of the book and the changes go on for pages and pages and pages.


No multiple choice test in high school could capture this, could it?

​On "Negro" music he writes:

​
His observation on the increasing “encroachment” of government on personal liberties (encroachment is my word, not his):


All of this is from the first few pages of Volume I! My bookmarks are everywhere and in all volumes.
This Author’s Thoughts on Mark Sullivan’s "Our Times"
“The period aimed to be treated is the first quarter of the twentieth century in America, from the beginning of 1900 to the end of 1925.”
Return to the journalists Bibliography Home Page