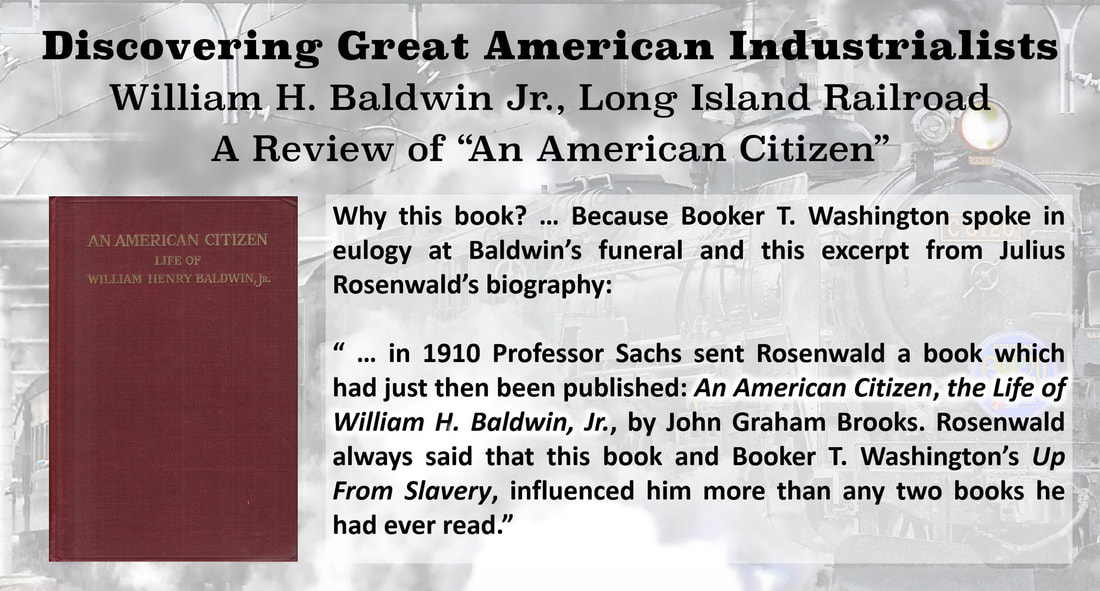 "Ignorance, arrogance and tyranny rise to the top in organized labor whenever such organization is opposed by tyranny and arrogance, and in my experience, I have seen as much of these qualities of human nature in the employer as in the employee."
William H. Baldwin Jr., An American Citizen
A Review of "An American Citizen" by John Graham Brooks
"An American Citizen: The Life of William Henry Baldwin, Jr."
The newspapers would report on the day memorializing William H. Baldwin that every vacant seat in the church was filled, the galleries were standing room only, and that seldom had there been such a “gathering of prominent citizens of the city [New York City] at such a service.”

The attendees included prominent businessmen of the late 1890s. Several of their names are still recognizable more than a century later such as Andrew Carnegie, William Vanderbilt, and Jacob Schiff. Many social, political and economic organizations were in attendance: East Side Civic Club, Colored Young Men’s Christian Association, Colored Republican Club of New York, several Southern educational societies, and local corporations such as the Corn Exchange Bank and Metropolitan Surety Company.

​The employees of his Long Island Railroad were well represented with over 200 in attendance.
​At 4 p.m. every head in the service bowed as well as every head on every train of the Long Island Railroad as the corporation’s vehicles came to a stop and remained so for a full two minutes in tribute to a man many would miss.
Are we too attuned to the bad and too far removed from the good? I am now struggling with how an author writes a biography that sidesteps this defensive armor of human mistrust, as I will probably face the same problem with my coming work on Thomas J. Watson Sr.

William Baldwin was a man who fought corruption by chairing the “Committee of Fifteen” that took on Tammany Hall and their support of organized prostitution in New York City. He was perceived as an honest arbitrator between capital and labor: those that funded the railroads and those that, at the time, were trying to extract every penny from these corporations—perceiving the industry as a whole as almost evil incarnate.
It was this deficiency that spurred my additional brief research into William H. Baldwin.
I am glad I did the research as the book describes an American industrialist that built his business on trust, cooperation, openness and good will. I highly recommend the book. Although, if there had been one chapter showing more of the internal struggle of the man, it would have gone a long way to making him more approachable to me—a mere mortal. Evidently, though, from reading a few of the reviews of the times, this was not a problem for those that knew or worked with William Baldwin. He was a good man in the opinion of all who dealt with him.

I don’t know if this is the book’s one failing or a fault of my humanity, but it was an inspiring read—once a little research overcame my initial objection.