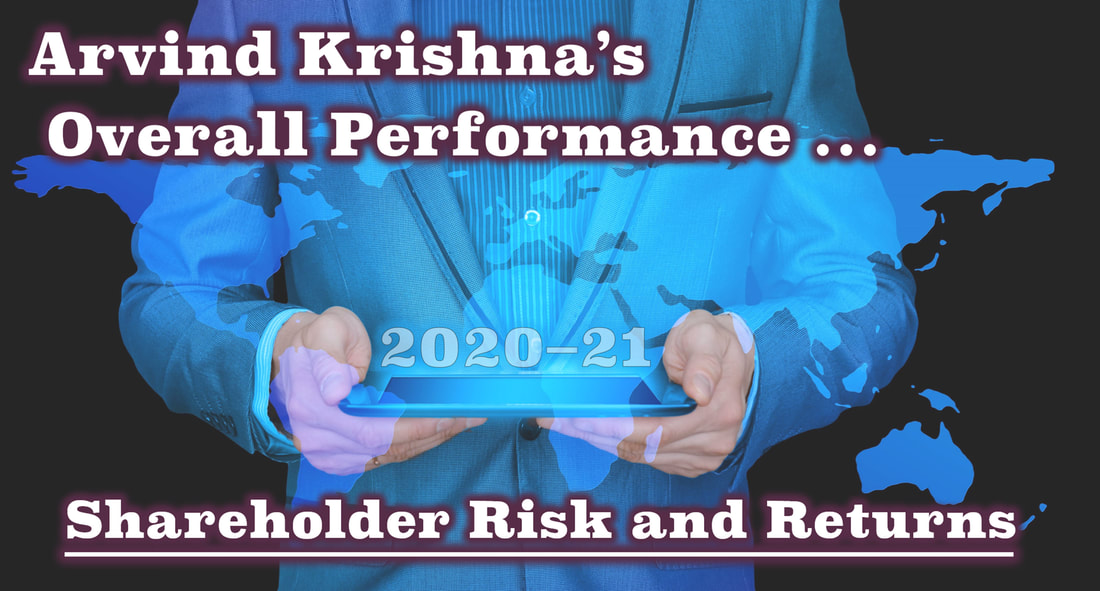 Unfortunately, to discover this information, an IBM shareholder still has to turn to the very last few pages of IBM's144-page Annual Report--a tradition started by Samuel J. Palmisano's team in his 2006 Annual Report. Although, the government requires this comparison chart, there must be no legal requirements on how "visible" this information must be for an investor.
IBM Shareholder Trust and Transparency
It is the case of a chairman discussing "what" he or she is doing and not discussing if what he or she is doing is actually "working." ​Above is the chart that Arvind Krishna included in his 2021 Annual Report . . . Card.
​This information is required by law, and it documents the corporation’s underperformance from 2016 to 2021. It shows a shareholder’s return on a $100 dollar investment in IBM common stock with all dividends reinvested. IBM's returns are the solid blue flatline. This chart was on page 136 of the company’s 144-page report . . . as far from the "Letter to Investors" as possible.
​This is the equivalent of a salesman withholding his end-of-year attainment to the last chart in a hundred-chart PowerPoint presentation—only revealing that he failed to make quota after his management team had fallen into a deep stupor of boredom.
​
This is not good form from a corporation that claims it can be trusted to be transparent, and that it wants to build confidence in its leadership and their ethical standards.

Great leaders of great corporations address their issues: They do not bury them.
Arvind Krishna's 2020-21 Shareholder Returns by the Numbers

Evaluating Arvind Krishna's 2020-21 ​Shareholder Risk
An intangible asset is something that, if dropped on your toe, doesn’t leave a mark. It is ethereal, and its value is open to personal interpretation, imagination, and creative thinking. For the purposes of this article, intangible assets are presented in two ways: first, the goodwill that arises directly from an acquisition; and second, all other intangible assets—patents, brand image, customer relations, non-binding contracts, strategic alliances, or others (from IBM's Annual Reports).

Of the $91.3 billion paid for its 207 acquisitions and resulting goodwill of $64.5 billion, $55.6 billion is still carried today as goodwill—more than 60% of all acquisition dollars. This goodwill carries no inherent value and, in a worst-case scenario such as bankruptcy, it would have little or no monetary value.
​
Therefore, an increasing percentage of goodwill increases shareholder risk. These charts start in 2001 because that is when an accounting change was made that allows a company to carry goodwill … effectively forever (writing cynically but close to the truth).
Arvind Krishna's 2020-21 Shareholder ​Risk by the Numbers