DISCERNING READERS
"It isn't a matter of dollars and cents, but of the principles of Lafayette. We wouldn't sell those principles for $140,000."
Thomas J. Watson Sr., Lafayette College Trustee

A History Lesson in Confronting Anti-Semitism and Bigotry 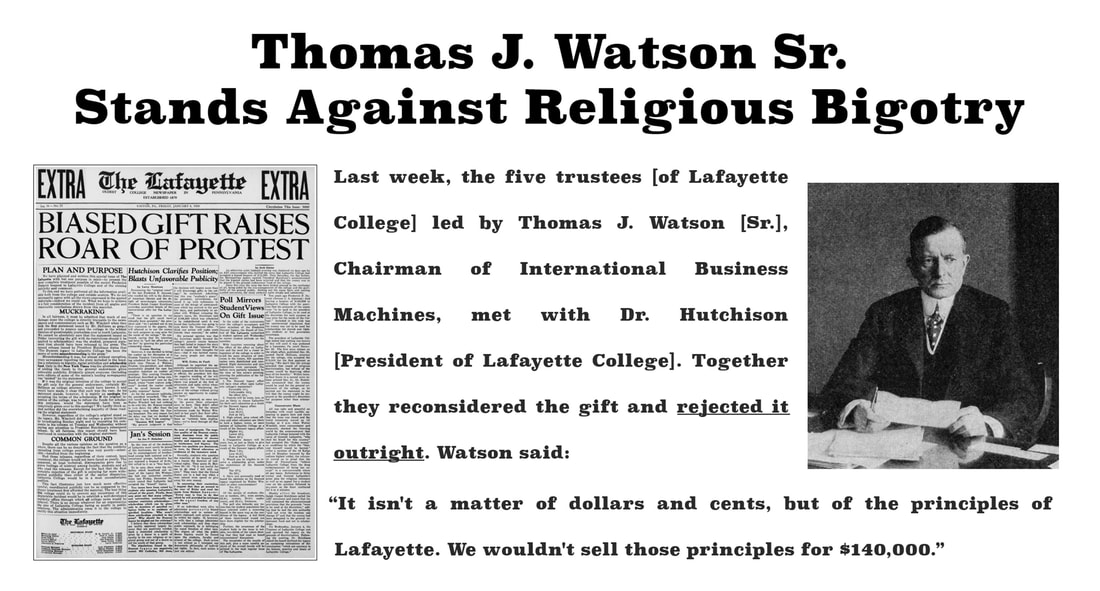 "It isn't a matter of dollars and cents, but of the principles of Lafayette. We wouldn't sell those principles for $140,000."
Tom Watson, Time Magazine, January 16, 1950
A History Lesson in Confronting Anti-Semitism and Bigotry
A Last Will and Testament Stirs a Nationwide Debate
Only five years after World War II and a little more than three years after the end of the Nuremberg Trials, Watson Sr. and the Lafayette College Board of Trustees saw their decision not as a choice concerning money but as a stand on principle. With the still-raw revelations of the horrors of the concentration camps, the principle of religious freedom was high on most leader’s lists. Tom Watson, vice-chairman of the university’s board of trustees, presided over a meeting at the University Club in New York to discuss the matter with Dr. Ralph Cooper Hutchison, president of Lafayette College. After the trustee meeting, the president issued a statement reversing his previous decision.

While the proceeds were to have been used for general endowment, the fact remains that the legacy contains an inoperative clause discriminating against Jews and Catholics. The board has therefore taken action declining the legacy as containing intimations of discrimination which are contrary to the history, practice, and ideals of Lafayette College.

Dr. Hutchinson pointed out that the legacy directs that the proceeds of the estate are to be paid to the president of Lafayette College … to be used at his discretion for such purposes as may arise for the needs of the college.

On this authority, the president designated these funds, as they are received, for the general endowment of the college, an alternative use permitted by the terms of the legacy for the scholarships—creedal [religious] limitations have therefore not been elected and are inoperative.
​
He stated firmly, “Lafayette College welcomes men of all races and creeds and extends its services to all nations and nationalities.”

With the court’s initial allocation of funds from the estate, the trustees have had occasion for the first time to consider this generous bequest of approximately $140,000.
​
While the proceeds were to have been used for general endowment, the fact remains that the legacy contains an inoperative clause discriminating against Jews and Catholics. The board has therefore taken action declining the legacy as containing intimations of discrimination which are contrary to the history, practice, and ideals of Lafayette College. Lafayette’s enrollment has always included a large number of Jews and Catholics, and some of its most distinguished alumni are among them.

​Concerning the publicity given Walter Winchell’s broadcast and column, President Hutchison dismissed the effect of media coverage on the final decision by the board of trustees. He stated:

The result would have been the same … Mr. Watson [Thomas J. Watson Sr.] wanted to turn down the offer from the beginning--long before the Sunday broadcast. The only reason for the delay was that we decided to wait for the New York [Board of Trustees’] Meeting [on Tuesday].

Legalism, Pragmatism and Principles
​This is a story of legalism, pragmatism and principles. The President of Lafayette College found a way around the provisions in the will to make the funds available to all students without regard to religious belief. It was a pragmatic approach to the problem solved through a legal tactic. The money would [See Footnote #3] not be used for “scholarships” but instead, for other student needs without discrimination. Finding a legal way to circumvent the will fulfilled both the duty of a lawyer and the pragmatic thinking of a university president struggling with limited college funds … but did this initial solution pass an ethical sniff test? This set of university trustees lead by Tom Watson, Lafayette College trustee from 1930–1956, believed not.
​The Lafayette Board of Directors under the leadership of Thomas J. Watson Sr. provided an example of the high ideals that should govern the decisions of local, national and international educational communities.
​This Author's Thoughts and Perceptions
Interestingly, my mother who received her college diploma in the mid-twentieth century—when it was still considered unusual for a woman, would have not qualified for one of these scholarships: She was both Catholic and, depending on how you define first-generation, a first-generation American. It is important to note that a poll of the student body at the time of this controversy, documents that one out of every three students would have been ineligible for one of these scholarships—a third of the student body was seemingly either Jewish, Catholic or a first-generation American.

This one statistic alone seems to negate any claims of any on-going, religiously-inclined bias as posited by Walter Winchell. This piece of evidence indicates that the college administration would have used the benefaction in the way they were proposing—without bias and for the good of the entire collegiate body.

In this situation, though, Thomas J. Watson Sr. backed up his words with action: He took a stand that reinforced a collegiate culture of inclusion, not exclusion. An inclusive culture is one of the distinguishing features of the United States of America: a culture invigorated by Lafayette, a Frenchman, fighting on our shores in the Revolutionary War; a culture bulletproofed even as brother-fought-brother in horrendous conflict in the Civil War; and a culture defended in two massive efforts that defeated militarism and fascism in back-to-back world wars—the latter of which, had ended only five years before. This was the culture strengthened by the Lafayette College Board of Trustees lead by one of the twentieth century’s greatest industrialists.

I can easily understand the position of the president who was determined to use the money to benefit all students. I can appreciate his legal, pragmatic, and non-discriminatory approach; but at the time, so soon after the unveiling of the Holocaust horrors, a “stand on principle” was appropriate and necessary. Thank God that we have the freedom of dissent, we can maintain character in discourse, and we may follow our decisions of conscience; in this instance, a board of trustees executed these principles and stood their ground.

May we keep controversial discussions forever open, informative, questioning, and … less confrontational.
A 1950 Student Discussion Over this Event
​On January 6, 1950, The Lafayette College Newspaper published a special issue to cover the on-going controversy [link here]. This issue is a good example of how media should handle sensitive topics like this one: It was timely in its publication; it contained a time line of events; and it was thoughtful—and thought provoking—in its coverage.

Footnote #1: Although the diplomat’s name is easily found through a newspapers.com search, the name has been removed within this article. The author does not believe that focusing on the individual making the bequest adds any value to the story and would actually detract from the purpose of the article.

Footnote #2: The implication being here that the endowment would be safely deposited in the general fund. That even if a trustee—who the president was responsible to—wanted to use the money for scholarships, thereby implementing the discriminatory clause, they could not. The money was safely and surely going to the general fund and no discriminatory intent would or could be implemented.

Footnote #3: It is important here to note that the word “would” is used by this author, not “could.” The reason for this is that the endowment was not given in one lump sum. It was to be distributed in small sums over a long period of time. This raises the issue that a future president of the college “could” either purposely or mistakenly use the funds for scholarships which then could only be used as stipulated in the will—in a discriminatory matter.
Return to the Thomas J. Watson Sr. History Home Page