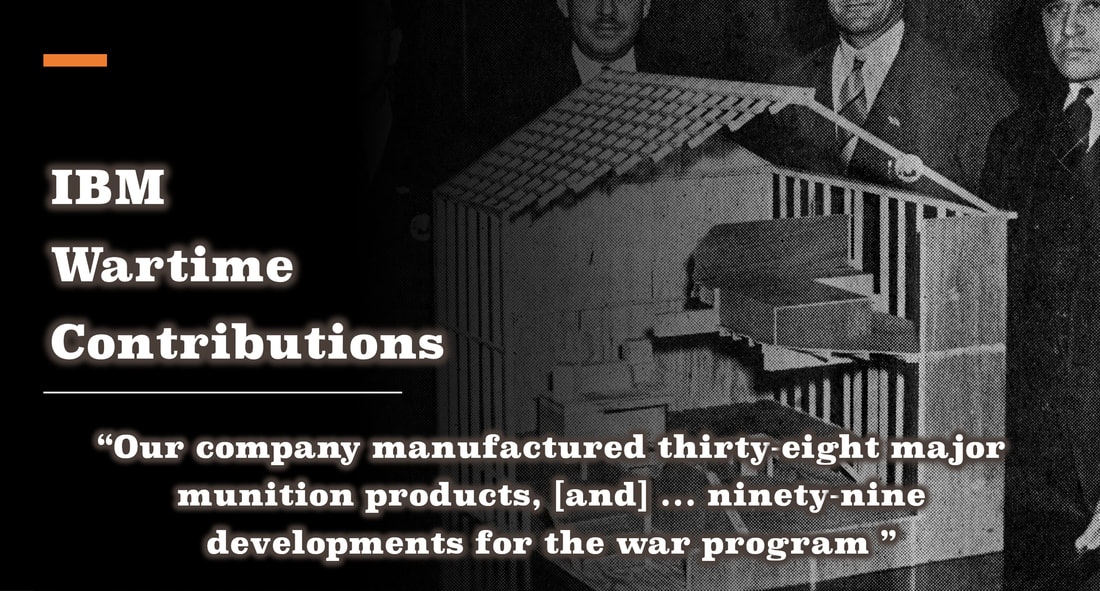 The IBM Corporation Heard the Country's Call to Service
For the benefit of the new employees, I wish to state that our company manufactured thirty-eight major munition products, that IBM inventors and engineers worked on ninety-nine developments for the war program, and that our extensive building and expansion program to meet the demands made upon us by the government was financed entirely by the company.
Watson Sr., National Telephone Conference, October 25, 1946
​IBM also contributed to the war effort by producing the following: (This is not a complete list. It is constantly updated as more research is completed.)
Poughkeepsie Plant
Endicott Plant
IBM
Thomas J. Watson Sr.
Researching (claimed in print but still verifying)
How did the Odograph work?
The Odograph, consisted of four principal components: (1) a compass—which monitored direction and was modified so that the "magnetic material" in a jeep did not affect its accuracy, (2) a cable—which was attached to the speedometer to monitor distance, (3) a plotting "brain"—which combined the direction and distance information to direct a plotting pencil which tracked a jeep's actual course on a map to scale, and finally, (4) a power pack. By September of 1944, the machine had been in production "for a year." ​

It was developed by IBM under the direction of corporate inventors and engineers. In October 1945, George F. Daly joined the IBM Quarter Century Club. At this time, he was credited with a total of 54 patents and, during World War II, he worked on a project that built an "automatic map making device" for the U.S. Army: the Odograph.

​(This article was updated on September 7, 2022).
Return to the Thomas J. Watson Sr. History Home Page