A Review of "The Master Workers' Library" 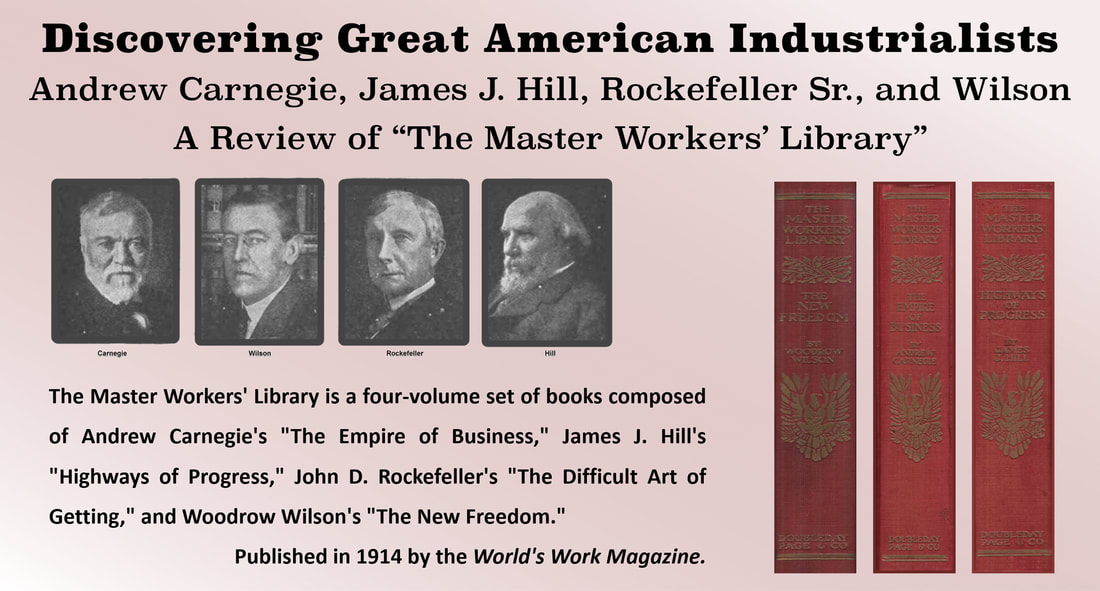 The Master Workers' Library is a four-volume set of books composed of Andrew Carnegie's "The Empire of Business," James J. Hill's "Highways of Progress," John D. Rockefeller's "The Difficult Art of Getting," and Woodrow Wilson's "The New Freedom."

​It was published by the World's Work Magazine in 1914.
​A Review of "Master Workers' Library" by Carnegie, Hill, Rockefeller and Wilson
The Master Workers' Library - A Four-Volume Set
Reviews of the Day: 1914
These book were reviewed individually when first published. If a full review is available with "Reviews of the Day," a link is provided below.
Editor's note: "Reviews of the Day" available with this link [here].
The entire book is consumed with his views on agriculture, its detailed analysis, and the sustainability of farming in the western lands. I thought I was reading about the wrong person. But he ties this all back to his obligation as a railroad owner to serve his customers.
A few quotes from the book that should question any over-generalization about the beliefs of early railroad men:
​
A 1912 Editorial Entitled "The Birth of New Freedom"
​​The Elmira Star-Gazette, July 5, 1912
Editor's note: I read this book because of a passage in Ida Tarbell’s book "Peacemakers—Blessed and Otherwise." She describes the ceremony of the laying to rest the first occupant at the Tomb of the Unknown Soldier. Reading "The Birth of New Freedom" led to the reading of Ray Stannard Baker's "Woodrow Wilson: Life and Letters."

​For an in-depth review of this book select this link: ["The New Freedom" by Woodrow Wilson].
Return to the Industrialist Anthologies Home Page