A Review of Forbes' "Little Bits about Big Men" 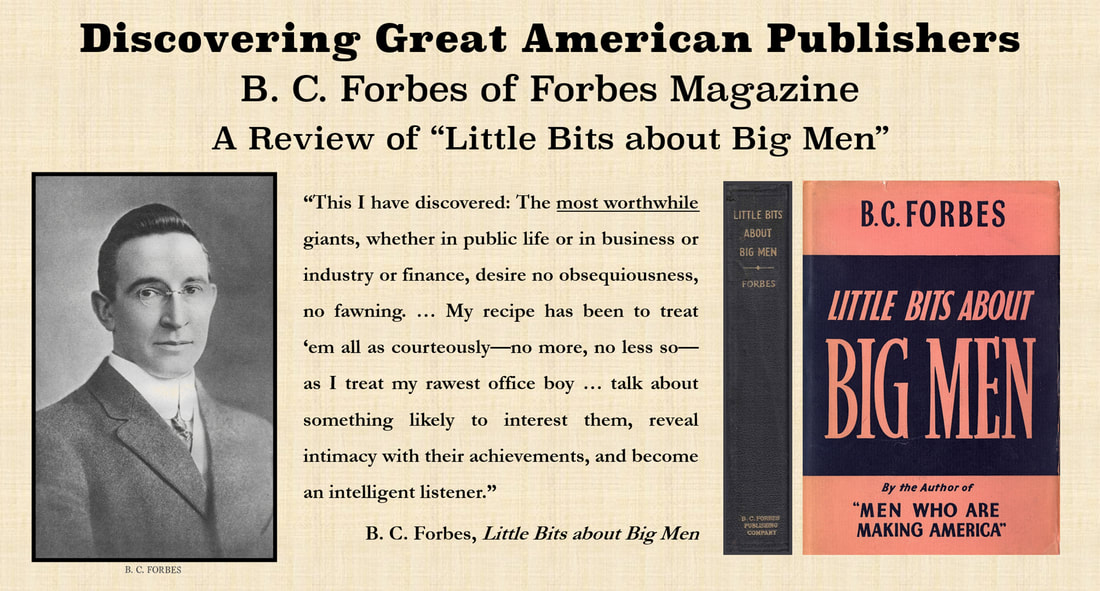 “Beyond being its author, I disclaim all responsibility for this book. The many scores of squibs in it—as well as hundreds of others—were jotted down by me over a series of years, without thought of publishing them in a volume. My colleagues of FORBES Magazine are the guilty ones. Blame them if you don't find here anything of interest."
B. C. Forbes’ "Introduction," Little Bits about Big Men
​A Review of Forbes' Little Bits about Big Men by B. C. Forbes
Reviews of the Day: 1940
There were quite a few reviews for a book that appears to have been released without much editing or additional journalistic effort that would be expected judging from B. C. Forbes’ previous works.

​Here are a few:
Benjamin DeCasseres,  “March of Events,” The Pittsburgh Sun-Telegraph, December 1940
Interesting Insights from Little Bits about Big Men
These are some of the “little” bits of insight presented of the “big” men called out in Forbes’ book. These insights are compilations of multiple “bits” presented throughout the book. Being able to search an electronic version made possible what wasn’t possible eight decades ago.
​These are quotes that I discovered that would have met B. C. Forbes’ criteria from his introduction: inspire broad sympathies, charity towards all, and a philosophical mode of life.
“His nearest Presidential prototype was Abraham Lincoln. Cal had Abe's rustic aura, Abe's simplicity and terseness  of speech, Abe's understanding of human nature, and, above all, Abe's keen sense of humor. … Coolidge’s trait was thriftiness. Under the surface, he had a delightful boyish strain. … [unfortunately] … the Presidency lost all its appeal when his younger son died.”
On James (Jim) Farley
“Jim Farley is held in high esteem because of his forthrightness. … He exercises the human touch more assiduously than any other man in public life. … an amazing memory, matching that of the late James J. Hill.”
On George Eastman
“The life and death of George Eastman should serve as a reminder that business success is not the be-all and end-all of human existence.” [read this for background on George Eastman and Thomas J. Watson Sr.]
This Author’s Perceptions of Little Bits about Big Men​​​​