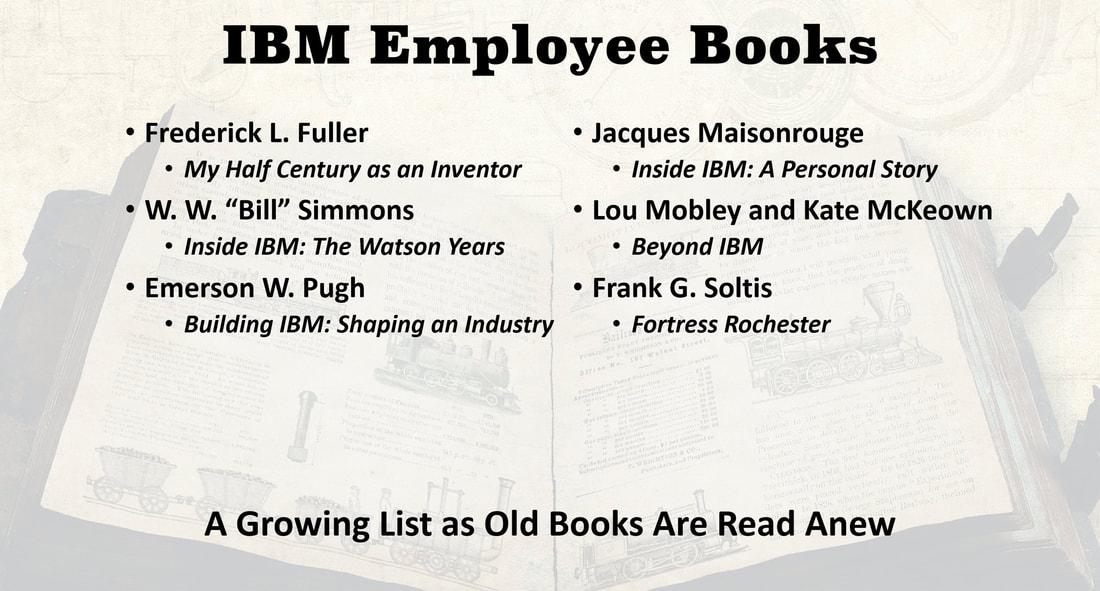 While the executive’s view may be fraught with misperceptions, generalizations and isolation, the employee’s view may be myopic, superficial and limited, and either may be swayed by greed. No matter the position, to gain an expansive view requires communication, openness, patience and humility. It requires becoming an employee-owner.

​An employee-owner—whether atop or beneath the elephant—changes positions to gain perspective. He or she shares new insights clearly and unselfishly so that others will learn. For a lifetime these employee-owners discuss their corporation's every movement and nurse its every wound. They establish a rhythm of life with it and never allow another caretaker to threaten its well-being.

​Their intuition is honed to recognize their ward’s slightest movement in fear or distress; and they learn to calm it—with a light touch on a tender spot in its rough hide. These employee-owners are the corporation's true caretakers.

The books highlighted here are a few of many written by IBM employee-owners: IBMers.
IBM Employee Books for Research
The View from Below: Employee Insights
Frederick L. Fuller: My Half Century as an Inventor
W. W. "Bill" Simmons: Inside IBM—The Watson Years​
​This is a fun and interesting insight from that chapter as William W. Simmons set out to answer a question many of us often wondered at IBM: “What characterizes the perfect IBM salesman? … I [Bill Simmons] instituted a study that I hoped would provide some guidelines for future recruiting."

"I was not convinced that the humanities, English and philosophy majors we were so eagerly embracing could effectively shift gears from 'The Portrait of the Artist as a Young Man' to 'The Schematic Diagram of a Real-Time, On-Line,  Random Access Computer System.' So I instituted a study that I hoped would provide some guidelines for future recruiting [of salesmen]. ...

"The most effective IBM salesmen came from 'outstanding' families--supportive, well-educated, financially secure, etc. No surprises there. But the next most effective category was something of a shocker: it was the broken home, the result of divorce, alcoholism,  poverty. ... [it seems] a salesman from a broken home did not want to duplicate a situation he had lived through, and consequently was more aggressive and did a better job than a salesman from an 'average family background.' "

​Bill can rightfully be credited with much of the success of the System 360. This product was a success of technology and salesmanship. It was his wild-duck observations and leadership that focused a well-trained IBM DPD sales force across fifteen vertical industries that lead to IBM's industry dominance in the '60s.
Jacques Maisonrouge: Inside IBM—A Personal Story
"The salesman must master a number of techniques: he must know the products and the services he is offering very well  indeed, together with their uses; he must understand something about their manufacture and the administrative structure governing their ordering; he must know whether delays in delivery are likely; and he must have good contacts. As well as this, he must possess very sound human attributes: he must listen to others, win people's respect, persuade, be pugnacious, make himself indispensable, reply quickly and precisely to questions put to him, and never hesitate to show himself as amiable with the receptionist as he is with the head buyer.

​"His love of his job, and the pride he takes in representing his company, must be apparent to all and sundry. By the time he reaches the final stage of the signing of the contract, which in a field such as data processing often takes the form of a discussion with the president of the client company, accompanied by his senior staff, the salesman's reputation as a man or woman of ability must be established and his capacity for rendering useful services obvious.

"Sometimes he may have spent months persuading people that what he has to offer will benefit the company concerned, now he must convince the man who has to sign the bottom line of the contract. Here we have a man or a woman—and women are just as capable as men at being salespeople—who without any hierarchical authority over the people he or she is dealing with has convinced them to make a major investment, and has done this through personal ability, by winning the client's approval and through an evident desire to provide the best possible service while inspiring the client's confidence."
​
This book was a fun read. I recommend it.
Lou Mobley and Kate McKeown: Beyond IBM
Although, I didn't agree that the best of humanity during Watson Sr.'s day can be stereotyped as wanting only safety, security, and a life-long career, Mobley and McKeown added a challenging generalized perspective worth consideration. I believe it explains why Watson Sr.'s autocracy reached a pinnacle by 1956, and why IBM underwent such explosive growth with Watson Jr.'s decentralization (they refer to it as a bureaucracy--a poor choice of, or maybe a dated usage of the word.
​
One area I will be pondering is the repetition in the book that the "information age" has more and faster change than the "industrial age." This is a prevalent idea in many current writings. It sounds logical, and it does cater to the egos of those in the current twenty-first century, but does this have anything to do with the character of change?

​Would the leadership of Facebook, Google and Twitter have the skill that was necessary to turn over a worldwide inventory of spring-driven time clocks to an electrically synchronized system of time machines—without bankrupting the organization? Could they survive downturns like the year-over-year recessions the early industrialists faced while preserving their best people? Has this new generation of leaders—and their style—truly been tested? We have had only two recessions in this century; Watson Sr. faced six recessions and The Great Depression during a likewise two-decade-long period. Today's 21st Century leaders are just babes in this respect.

Also, since I had just finished reading Henry Ford's three books (My Life and Work, Today and Tomorrow, and Moving Forward), I don't believe he would agree. His principles of leadership are more akin to what Lou and Kate describe later in their book as a Teleocratic Management System, although, he had a very dictatorial style in the implementation of the thing worth doing. He describes going to his team and saying, "We are dropping the price of the car by $50.00 next year because we made too much profit last year. Figure out how to make more profit charging the customers less while improving quality." Yep, the thing worth doing. His story of "99 Ships" is another amazing example of taking on a thing worth doing. Maybe we are getting too hung up in our perceptions of the past without intelligently studying the past's successes?

​I also wonder if it was Mobley who put the monkey on his back (looked more like a gorilla) during my IBM new manager training in Armonk?
Frank G. Soltis: Fortress Rochester--The Inside Story of the IBM iSeries
​The appendix also lent credibility and supporting evidence to the greatness of Frank Cary's leadership during the '70s and his involvement in driving IBM to recognize a marketplace outside of the System/360 and System/370. Long live the System/3, System/32, System/34, System/36, System/38 and AS/400 that was delivered by a great team in Rochester, Minnesota.​
Emerson W. Pugh: Building IBM: Shaping an Industry and Its Technology
Return to "IBM Books for research" home page