Review of B. C. Forbes' "Men Who Are Making America" 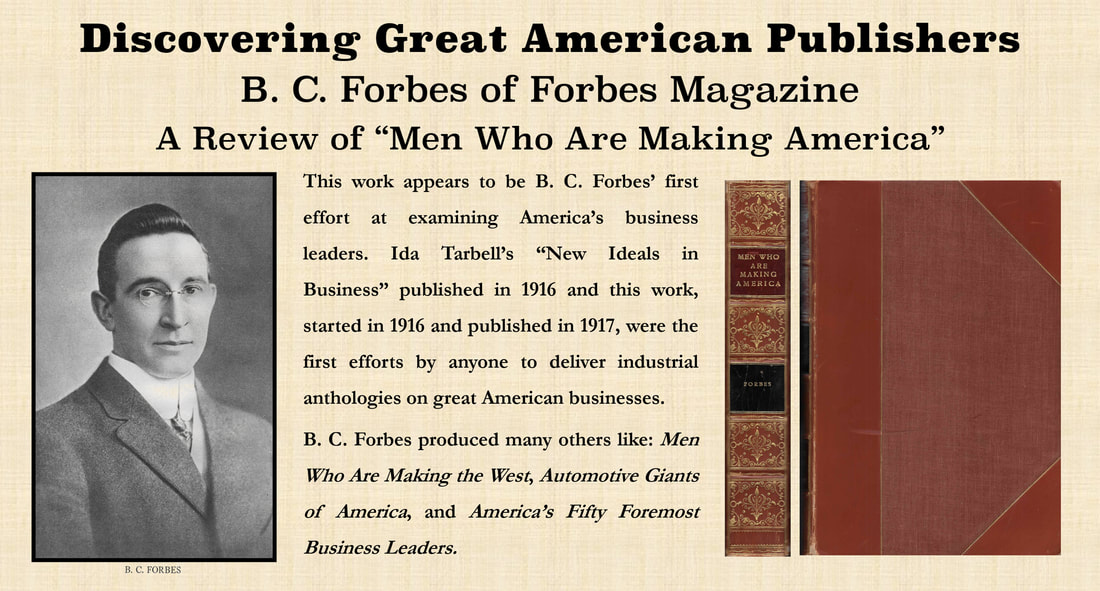 ​In 1916, B. C. Forbes would ask some seven thousand businessmen in America to select, from their peers, fifty individuals from a list of some three hundred names of whom they considered America’s Greatest Businessmen.

Forbes wrote that, “The nation has honored—justly, no doubt—theorists, dreamers, poets, philosophers, lawyers, teachers, preachers and politicians.” He proposed elevating the men who filled “pay-envelopes and dinner-pails” into an American Hall of Fame. Some were included in the list that individuals did not consider businessmen: Thomas A. Edison, inventor, and George W. Goethals, builder of the Panama Canal.

When the first one thousand votes were tallied, he wrote that, “Industrial leaders like Judge Gary of the Steel Corporation, Theodore N. Vail of American Telephone, Charles M. Schwab of Bethlehem Steel, and J. Ogden Armour of Chicago were ranking higher than top popular financial leaders … even J. P. Morgan.”
​
The final fifty are listed at the end of this article [link there now].
​A Review of "Men Who Are Making America" by B. C. Forbes
Reviews of the Day: 1917–18
​The Louisville Courier-Journal, March 4, 1918​
Selected Quotes from B. C. Forbes' Interviews
The most valuable ability of all is the ability to select men of ability.
​There is luck in the world. There may be luck in getting a good job—but there’s no luck in keeping it.
​​J. Ogden Armour, Armour & Company
​​Success that is worthwhile is, after all, very largely a matter of plain, every-day morality combined with tremendous industry and a deserved reputation for integrity and for fairness toward the other fellow.
​​Alfred C. Bedford, Standard Oil of New Jersey
​​[The secret of success is to] reach out and learn the work of the man ahead of you, but also to teach your job to the fellow below you.
​​Henry P. Davison, Bankers Trust
This Author's Thoughts and Perceptions
​Some of the insights were fascinating. I have read and reviewed several of Carnegie's works and to say he was a complicated man would be the deepest of understatements. Forbes does seem to capture that complexity in this observation.
This work appears to be B. C. Forbes’ first effort in this field of examining America’s business leaders. While he was submitting his questions to the leading businessmen of America, Ida M. Tarbell had been visiting businesses all over the United States for several years. In 1916, she published a magnificent work entitled, "New Ideals in Business."

Between her work published in 1916, and B. C. Forbes work started in 1916 and published in 1917 a new genre of books was established: Anthologies of American Industrialists. Although this was Forbes' first effort, it lead to other works such as: Men Who Are Making the West, Automotive Giants of America, America’s Twelve Master Salesmen, and America’s Fifty Foremost Business Leaders.

I loved this work and, although, overshadowed by some of his later works, improvements are seen over time. As with any on-going human effort, if every attempt builds on the learning processes of the previous attempts, success is in that thing called constant improvement. I have to believe that Forbes looking back from 1948 with the publication of America’s Fifty Foremost Business Leaders at this first attempt in 1917, would shake his head at what he did and did not say.
​
So with that, these are observations to keep piecing together information from a variety of different and credible sources to paint as complete a picture for myself of our history. I want to be able to read this when I am putting together a complete picture and say, “Yes, personal interview. Yes, personal opinion. Yes, good insights that match other sources, or not.”

This book accomplished this for me as you will read below about J. Ogden Armour.
​If there is one thing I am sure of from the reading of B. C. Forbes’ works, it is much the same as the respect I give to Ida M. Tarbell. If there are shortcomings they are not failures of character. I trust the brand of “B. C. Forbes” as much as I do “Ida M. Tarbell.” I do not need to look for trickery or deceitfulness, but, maybe, just that which all humanity has in common: lack of time on this earth to do everything to the standards we expect of ourselves … and there are always “firsts.”

With that grain of salt consider these thoughts.

There were many times when Mr. Forbes does seem to ignore too much on the business side. To me it is best described in a book that John D. Rockefeller Sr. wrote in which the first chapter was “The Difficult Art of Getting” and the last chapter was “The Difficult Art of Giving.” Forbes seems at times to focus on some individuals’ “giving” and forgets to paint a complete picture including their art of “getting,” that may have been at times . . . unworthy. In reading his review of Rockefeller, it cast some doubts that he painted with too much of a broad “giving” brush at the expense of understanding how they "got what they had" … maybe through ruthless means [Review of John D. Rockefeller Sr.'s Reminiscences of Men and Events here].
Even with this though, this book provides a good base to reach out and evaluate more of our American history and its leading industrialists. For instance, reading the short vignette in the book on J. Ogden Armour inspired me to locate and start reading The Packers, the Private Car Lines and the People. Evidently this was written in response to the attacks on the meat packing industry and the work of fiction by Upton Sinclair, The Jungle.
​
In addition to the quotes above by Armour in his interview with B. C. Forbes, some of the following insights I found quite interesting. Forbes observed, “During one recent month 14,000 visitors went through the Armour packing establishment in Chicago, where every single operation in the killing of livestock and the preparation of the products is wide open for inspection every day.”  It would seem impossible to hide the claimed issues of Upton Sinclair from 14,000 pairs of prying eyes—a month. Although highly profitable it appears the profitability came from efficiencies as, “profits last year averaged less than three cents on the dollar.”

​And then this final observation: ​

I took occasion to speak to numbers of the workers when Mr. Armour was not with me and I found they regarded him more as a colleague than as a boss; they felt that they were all working together, that they were working with rather than for him.

I could believe Mr. Armour, therefore, when he said to me: “The best thing about my work is the loyalty of our people. There are such wonderful fellows all round about me. If it weren't for that, I would not give two cents for holding on to Armour & Co. The boys who run the business with me make the work a pleasure.”

​Did I say I am looking forward to reading J. Ogden Armour’s book? [read "The Packers" review here] Maybe Upton Sinclair’s work of fiction—supposedly based on fact—exposed something that was too generalized for the public to selectively receive? Did he have his own agenda? I wish Ida M. Tarbell had researched and written on Armour. Her evaluation would have been greatly appreciated, but, so far, I have encountered no mention of Armour (the man or the company) in her works.
This was a book that raised so many new questions! J. Ogden Armour was only one … there are fifty others to be explored. I look forward to finding even more questions … and, maybe, a few answers.
Editor's update: Pete did read and review J. Ogden Armour's book, "The Packers" [review here]. Also, Ida M. Tarbell did not write about J. Ogden Armour, but a peer of hers did: Ray Stannard Baker. This did provide new information on J. Ogden Armour such that the evaluation of B. C. Forbes above seems most accurate [review here].
As promised above, the list of the fifty "Men Who Were Making America" in 1917 as chosen by their peers is below. 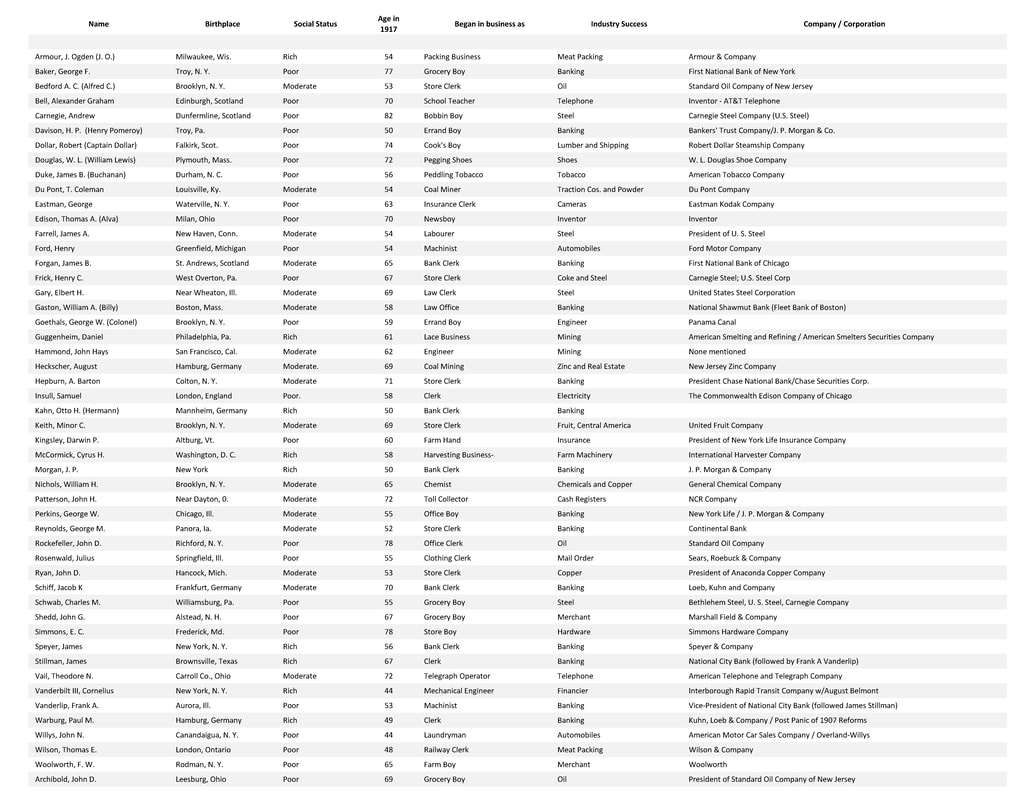