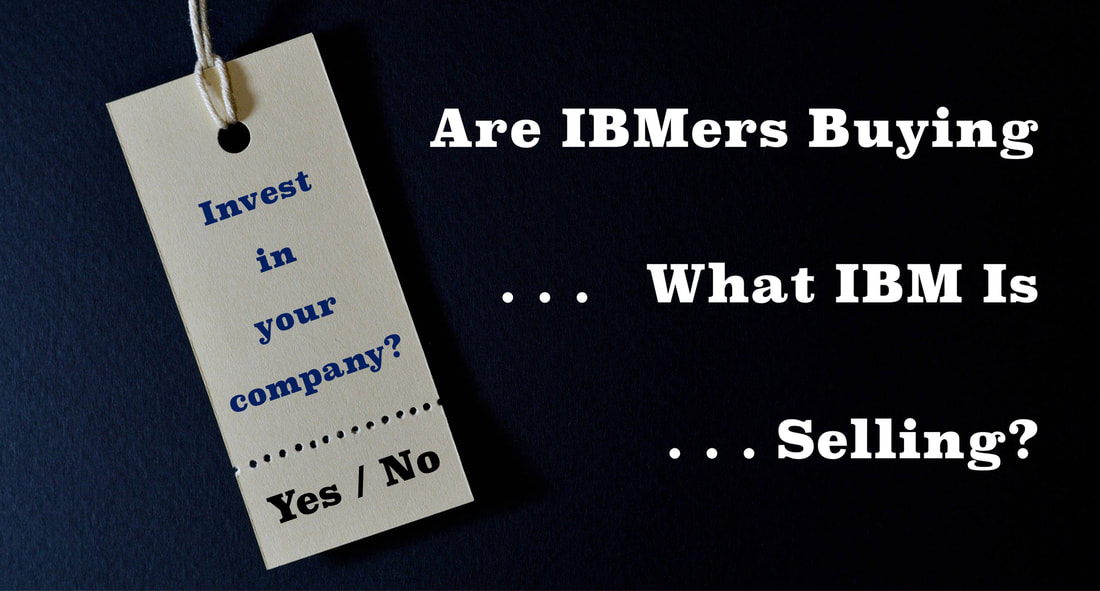 There is enormous strength in proprietorship—people develop strong attachments to the things they own, especially if they can influence whether those things succeed or fail—​and it seemed imprudent to let the ownership of a business rest with people [capitalists] and institutions [bankers] that are not directly involved.

​Remedying this situation would have to be an evolutionary process, but as I imagined it, gradually, over two or three generations, a business would, by law, shift into the hands of employees.

Thomas J. Watson Jr., Inception of IBM ESPP in 1958, "Father, Son & Company"
The caveats are: (1) employees must be empowered to influence success and (2) the company is worth owning. IBM's 21st Century leadership is failing the employees and the corporation on both counts.
​IBMers Aren't Buying What IBM Is Selling
Touching an Employee's Heart and Mind
A New IBM Employee Engagement Key Performance Indicator (KPI)
In the 21st Century, consider this three-decade-long  employee stock purchase plan (ESPP) trend when deciding where to deposit your next investment as either a customer, an employee or a shareholder.
​Fear of unemployment and social-media, performance-based appraisals may mute IBM's employees, but they are speaking loud and clear in other ways: in their productivity and with their wallets. ​Maybe the Drucker Institute and the Wall Street Journal will one day look deeper into IBM's real problems because they recognize some dire corporate symptoms: a three-decade decline in employee stock purchase plan participation and a two-decade decline in employee revenue and profit productivity.

Doing so would surely help their credibility because since 1993, while IBM’s full-time headcount has increased by almost 40% the number of shares purchased by its employees has fallen by 90%.
Footnote: In 2005, Sam Palmisano as part of his ongoing employee-benefit, cost-reduction measures, reduced the employee stock purchase plan (ESPP) discount percentage from 15% to 5%. From discussions with fellow employees at the time, many long-term employees stopped their employee stock investments and started selling their shares. The new discount did not compensate for the risk of ownership . . . and Enron (2001) was fresh on many fellow employees' minds.