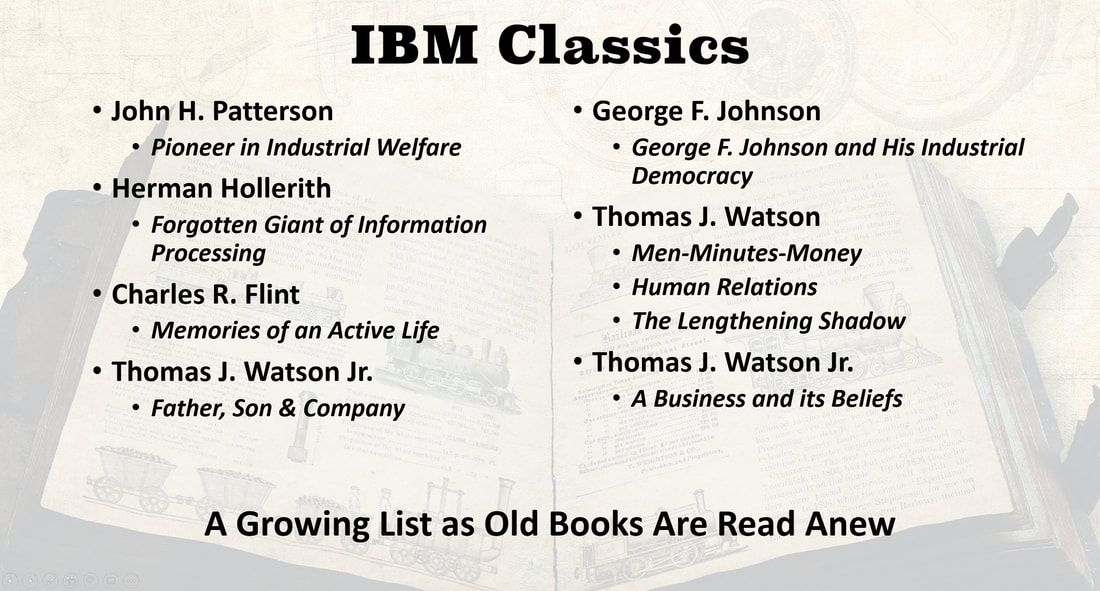 These IBM Classics cover books that any student of IBM should start with to understand the company and its early leadership. Many think that the ideas and ideals of Tom Watson Sr. started with him. He was actually surrounded by like-minded men and women who understood the need for balance in running a corporation.

Tom Watson's beliefs were deeply rooted in other men he worked with like John H. Patterson of the NCR Corporation, George F. Johnson of Endicott-Johnson Shoe Company, and Owen D. Young of General Electric Corporation. Samuel Crowther's biography of Mr. Patterson, John H. Patterson: Pioneer in Industrial Welfare, goes a long way in showing a different side of the NCR executive that has been lost in too many perspectives written without a knowledge of what is between the covers of this book.

In many ways Tom Watson, took the best of Patterson and left his very-human frailties behind.

​Shouldn't that be our goal: to integrate the best of others into our moral fabric, thereby …

​… compensating for our weaknesses.
IBM Classic Books for Research
Understanding the early IBM requires some background reading. This is the beginner's primer—​a where-to-begin list.
John H. Patterson: Pioneer in Industrial Welfare
Herman Hollerith: Forgotten Giant of Information Processing
Charles R. Flint: Memories of an Active Life
Read the full review of "Memories of an Active Life:" [here]
George F. Johnson and his Industrial Democracy
There is no other way to put it: These books are at the heart of the early IBM and put it on display for all to see.
Thomas J. Watson Sr.: Men-Minutes-Money
Thomas J. Watson Sr.: Human Relations
The Lengthening Shadow: The Life of Thomas J. Watson
The Will to THINK (with Introduction by Tom Watson Sr.)
A Business and its Beliefs: The Ideas that Helped Build IBM
Father, Son & Company: My Life at IBM and Beyond
Thirty Years of Management Briefings: 1958 to 1988
Return to "IBM Books for research" home page