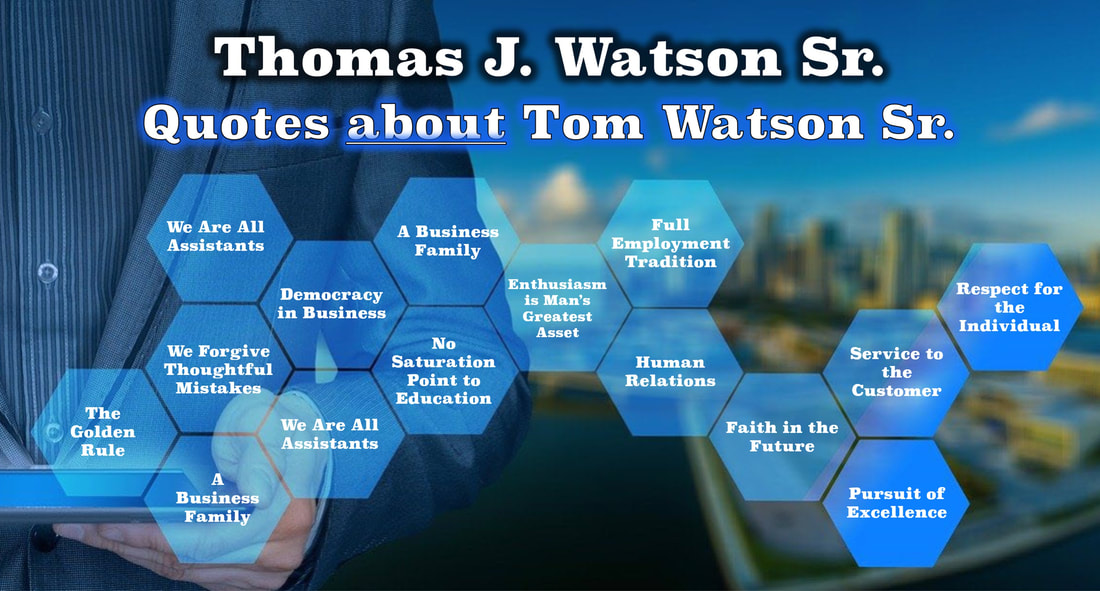 Insights into Tom Watson Sr.'s Character
"​He recognized in all men, his brothers. That simple, yet profound, thought governed his life and work. This was the foundation for his fair dealing with customers, employees and associates."
​J. C. Penney, Watson Memorial Homestead Dedication, 1957
"The truth came to him simply—he believed clothes don’t make the man, but they assist the gentleman."
Rev. Dr. Paul Austin Wolfe, Brick Presbyterian Church minister, Eulogy
"In the passing of Thomas J. Watson, the nation has lost a truly fine American—an industrialist who was first of all a great citizen and a great humanitarian."
Dwight D. Eisenhower, President of the United States, Press Release June 1956
"We met at the Boy Scout luncheon and … talking to him [Tom Watson], you reflected to yourself that this was a fine way to grow old—and you thought to yourself that America is fortunate in having elder statesmen of the stripe of Tom Watson and Bernard Baruch."
Ed Sullivan, “Today in New York,” January 1956
"​News has just reached us that Mr. Thomas J. Watson, International Commissioner of the Boy Scouts of America, has 'Gone Home.' We shall miss him at our gatherings. It was he who fitted up the Hall at Niagara with the simultaneous interpretation apparatus which saved so much time. He was head of International Business Machines, but we shall remember him as a very humble man, who believed that Scouting was, after a Faith in God, the most important thing in the world.

​"Ripe in years, but still young at heart, his great wealth meant nothing to him personally: he was only deeply grateful for the power it gave him to help others. Our sympathy goes out to his family and the Boy Scouts of America who have lost such a leader and such a friend."
​Lord Rowallan, Chief Scout, The Outlook, August 1956
​"Watson—and this, I think, makes the man singularly interesting—was a uniquely American type and one the Establishment has never understood throughout our history. He was possessed of a towering intellect but was totally non-intellectual. He belongs to the same type as Abraham Lincoln, who similarly offended the establishment of his day: the cosmopolitan, polished, learned Bostonians who considered themselves so superior to the yokel President in whose Cabinet they were forced to serve. …

"This American type is totally native and owes nothing to Europe—which is one reason why the intellectuals of his time do not know what to do with him. Typically, the men of this type have a gift for words, and Watson fully shared it. But they are not men of ideas. They are men of vision. What makes them important is that, like Watson, they act on their vision.
​
"That he did so, made Watson one of the Americans of his generation who did make a difference."
​Peter F. Drucker, Esquire, December 1983
"Mr. Watson was a business leader who placed the long-range needs of the country and the customer above self-interest; he was a humanist who realized the importance of the development of the whole man; he was a world statesman who recognized that American peace and prosperity are inexorably bound to the welfare of the world; he was an educator who emphasized the value of knowledge in any endeavor; he was a patron of the arts who knew that a person does not live by work alone.
​
"Most important, Thomas J. Watson was a man who valued other men above all things."
“IBM Bids Farewell to its Founder,” Business Machines, July 1956
"Watson insisted on sharing prosperity with employees, not only in wages and hours, but also in collateral fringe benefits, including cultural and leisure facilities. Watson knew that, unless he went out of his way to show that a big enterprise could be humane and considerate, it would become a psychological symbol of oppression and exploitation."
Merryle Stanley Rukeyser, The Economic Outlook, Kingsport News, June 1956
"No man could win the kind of loyalty enjoyed by IBM without a heart overflowing with human kindness. No man could command the respect of Presidents and workingmen alike without a great mind and a warm personality. … Tom Watson was proud of the accomplishments of IBM.

​"But we have a feeling he would rather be remembered as a kind and helpful human being … a good husband and father … a faithful friend … a considerate and generous employer.

​"For these were the investments that returned his greatest dividend—Love!"
Jim Trevitt, The Vestal News, June 1956
"He was intensely human. … There was nothing cold, aloof, or mechanical about Thomas Watson. … The IBM Chairman was not known so much for wealth as he was for warmth of heart and charm of personality. … His example will inspire generations to come."
Editorial, The Troy Record, June 1956
"If Watson had only been a businessman, he would have been famous enough, but … he was one of the first of a new breed of U.S. businessmen who realized that their social responsibilities ran far beyond their own companies. A man with consuming interest in virtually every area of human endeavor, he had a rare ability to translate his thoughts into action.

​"His entry in Who's Who in America was for years the longest of all, but, unlike many joiners, he worked hard at everything he gave his name to. … He was a longtime trustee of Columbia University and Lafayette College, campaigned hard for the United Negro College Fund, the Boy Scouts of America, the Y.M.C.A., the Salvation Army, gave generously to religious groups."
Time Magazine, Corporations: The Soldier, July 1956
"In a unique way, this quiet, modest man was a part of the vast growth and increasing complexity of modern business. … But he was more than the head of a gigantic and successful enterprise. His concern for others was shown in countless benefactions, in unselfish service with the civic groups, in lavish gifts of time and money to science, art and international understanding."
Editorial, The Evening Sun, June 1956
​ Comments on Tom Watson Sr.'s Character and Service to Mankind
"Tom Watson, like all good Americans, is ready to follow the President in the acceptance of and in aid of all expedient measures to rescue this country from the disasters of this great depression. His sympathy is quick, his understanding keen, and he glories in action, and so either leads or supports leadership in action. …

"He values too highly what has been done in the last two generations to destroy either our economic or political machinery ruthlessly in anger, envy or despair. He would improve it."
​Owen D. Young, Society of Genesee 35th Annual Dinner, February 1934
"I know no man in America who has done more, and very few who have done as much, as Mr. Watson has done for his country, not only in the business field, but for education, for civic activities, for fraternities, for youth—in short, he spends his days and most of his evenings and nights … and I don't know how he gets the time to do all … going about doing good in the broadest sense. He is an inspiration to other business leaders, and he is particularly an inspiration to those of us who, like himself, have young sons coming along, because we do not want our oncoming generation to feel pessimistic about the future.
​
"We may have and do have present troubles, clouds, but we are going to lick all our difficulties and overcome all our obstacles. What we need is a lot more men of the character and the caliber, the enterprise and the foresight and the ability of Mr. Watson."
​B. C. Forbes, Presentation of Modernization Cup, May 1936
"​The keynote of Mr. Watson's life is service. No one who knows him even slightly can doubt that. I don't think there is a man alive who is more eager to better the common lot of mankind, regardless of race, creed, or color.

​"I am sure that he is among the world’s leaders in actual accomplishments toward that end."
​Frederick L. Fuller, My Half Century as an Inventor, 1938
"His dynamic personality, vision and ability have brought him into world prominence by reason of his championship of those causes that make for peace and accord among nations."
​Grover A. Whalen, President, New York World’s Fair, May 1939
"​Our new honorary alumnus … is one whose expansive interests have a worldwide effect … but whose personal sympathies reach out to improve the life of every individual worker in his employ. … There are so many fine things. … educating the workers in his employ, the handicapped and the blind, and a hundred things that … would take a whole afternoon to tell you. … he has found time to give generously of his means and talents to the promotion of charitable, cultural and patriotic enterprises. …

"He has made two blades of grass grow where one grew before."
​Henry L. Jacobs, President of Bryant College, 1945
"​In this time of confusion and danger each of us has his part to play. Mr. Watson has a role of great importance and we can all rejoice in the fact that united in him are the moral and spiritual qualities required for successful leadership of the world toward enduring prosperity and peace. We can follow his leadership with confidence. We can emulate the integrity, the vision, the self-discipline, the search for knowledge and understanding, and the simple child-like faith in unchanging spiritual values that have made him great."
​Chancellor William P. Tolley, Syracuse University, The Post Standard, August 1946
"​Thomas J. Watson represents for me the ideal of the American businessman. He is a citizen of the world, seeing the same opportunities for all people of all creeds and races."
​Jarmila Novotna, Czech Republic Opera Star, August 1949
"At all times and everywhere you have eternally kept on striving to improve the material and the spiritual condition of mankind. You have done this in a big and organized way, and at the same time in a remarkable way you have kept a constant realization of the individual needs of thousands of people whom you know. … You have carried your immense responsibilities and burdens lightly, and at all times have added a creative touch for the solution of any problem presented to you. …

"I just want to point out that your willingness to back up and sponsor our movement here in the Blue Ridge Mountains of North Carolina has brought a new power of accomplishment and a new strength of purpose to thousands of mountain people whom you have never seen and whom you do not know. …
​
"Your generous, creative, staunch life has added to the reservoir of good in the world and helped lift mankind to a higher level."
​James G. K. McClure, Tom Watson’s 80th Birthday, 1954
Return to the Thomas J. Watson Sr. History Home Page