A Review of "Famous Leaders of Industry: Third Series" 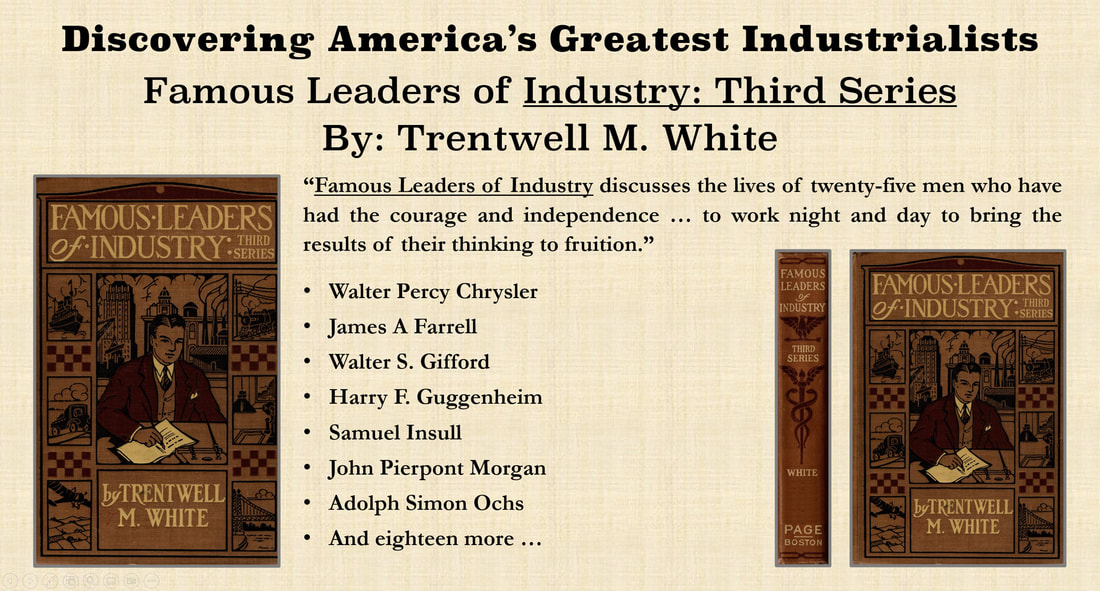 A Review of "Famous Leaders of Industry: Third Series"
Reviews of the Day: 1931–32

“Trentwell White is out with the third series of ‘Famous Leaders of Industry.” … Agreeably written, [it] makes you feel that you had met each man and talked with him.”

“The third series of life stories … will be eagerly welcomed. … One chapter will especially interest readers of this section—the story of Mr. Penney, chain store wizard, who arrived in Kemmerere, Wyoming, in 1902 and founded the Golden Rule Stores.”

“This book is a series of brief biographical sketches of modern-day industrial leaders. These sketches do not follow the style of modern biography but simply narrate in objective fashion the accomplishments of these men. Although complimentary in their nature they reveal some facts that are not generally known.”

The Daily Oklahoman, “An Oklahoma Angle on Things Literary,” June 12, 1932
Trentwell M. White on "Famous Leaders of Industry: Third Series"
“I have tried sincerely to know these men and their careers as intimately as possible, and at the same time avoid being too close to them to destroy their proper proportion. … They all feel that they have just begun rather than finished a life of worthwhile service.”
​Trentwell M. White, “Foreword”
“One of America’s great chieftains of electricity, the man who stands at the head of the largest single electricity producing company in the world. … Samuel Insull became Thomas Alva Edison’s private secretary. … It was but a few years before Edison turned over to Insull the complete management of his business affairs, and Insull took charge with a success that Edison never tires telling about. …
​
“Samuel Insull believes firmly that his business is concerned with the advancement of American civilization. … He is endeavoring … to contribute to the work of producing raw materials more economically, manufacturing them into useful products more efficiently, and assisting in the more rapid distribution of finished articles, so that the country and the individual may live more comfortably and hence more happily.”
On Vincent Massey
“Vincent Massey is hailed as one of Canada’s most brilliant statesmen. He is regarded as the truest type of pioneer of the ‘Third British Empire,’ and as a man who reflects in his every move his complete belief in the universal spirit in social and political life. His various public addresses in this country and abroad manifest a deep and sympathetic understanding of human problems and their solutions.
​
He has an unbounded faith in Canada, and an honest devotion to his King and country”
This Author’s Thoughts on "Famous Leaders of Industry: Third Series"
By the arrival of this third in the Famous Leaders of Industry series, now written by a new author—Trentwell Mason White, school districts were picking up on the series and adding them to their required reading lists for seventh, eighth and high school grade levels. In Idaho, the “Second Series” was included in a lists of books that provided “special credit” once a student submitted a review. In Colorado, seventh and eighth graders were required by the state school board to read Wildman’s “Famous Leaders of Industry: Second Series” and “Famous Leaders of Progress.”
If more detailed information on individuals is available on this website—such as Penney, Swope and Young, I have provided links in the following list of leaders covered in this book.