A Review of "Edison: His Life and Inventions" by Dyer and Martin 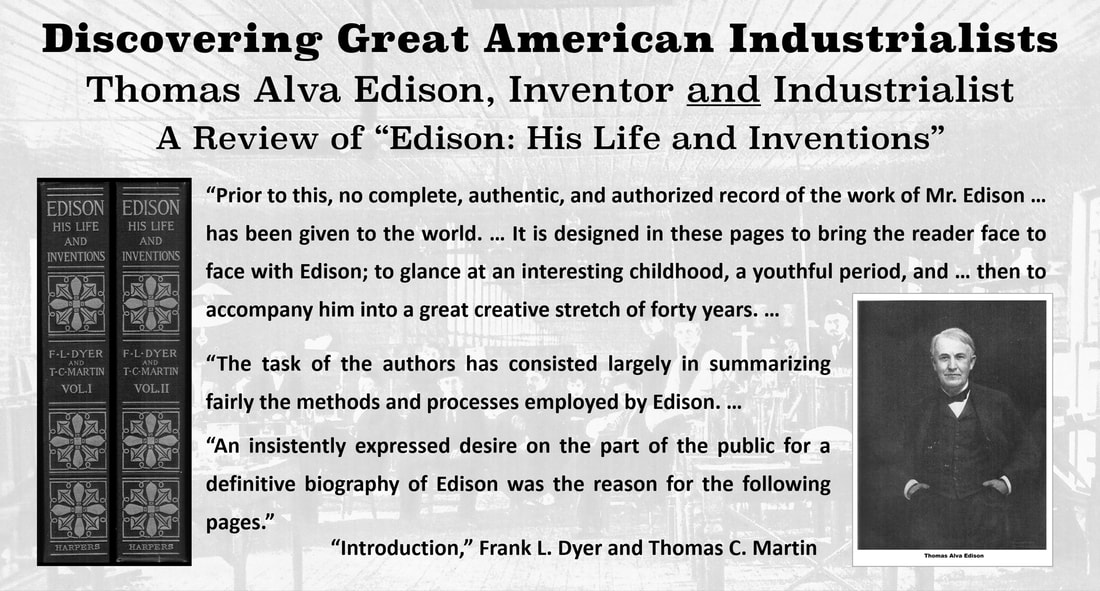 A Review of “Edison: His Life and Inventions” Volumes I and II by Martin and Dyer
Reviews of the Day: 1910

“This biography is the work of Frank Lewis Dyer and Thomas Commerford Martin. Mr. Dyer is general counsel for the Edison laboratory and its allied interests, while Mr. Martin is a close friend of Edison’s and former president of the American Institute of Electrical Engineers.”

“To read the life of Edison and to consider his work is like reading a wonderful story, and Dyer and Martin … have produced something which deserves … a reading. … The two volumes are splendidly illustrated and finely gotten up.”

The Portland Sunday Telegram, “Books and Authors,” 1910
Interesting Insights from “Edison: His Life and Inventions”
I found the following one of the highlights of the book because it fit well with Henry Ford’s method of producing cars. The automotive wizard would study his cars, decide what the price should be, not looking at the competition, not accepting what it was, and he would then lower the price while improving quality and quantity. He challenged his manufacturing organization—and his competitors, to then produced cars of similar quality at a profit at that price.
​
Seems he and Edison thought alike in this respect. This is the story of the production of the incandescent light and making it profitable:
​Edison shared the following:

“The third year I succeeded in getting up machinery and in changing the processes, until it got down so that they cost somewhere around fifty cents. I still sold them for forty cents, and lost more money that year than any other, because the sales were increasing rapidly.
​
“The fourth year I got it down to thirty-seven cents, and I made all the money up in one year that I had lost previously. I finally got it down to twenty-two cents and sold them for forty cents; and they were made by the million.
​
“Whereupon the Wall Street people thought it was a very lucrative business, so they concluded they would like to have it, and bought us out.”

This Author’s Perceptions of “Edison: His Life and Inventions”
I am sure that “Wall Street” charged what the market would bear after that, and that if Edison had remained in the business someone would have cried “monopoly” at a business that grew ever larger and more competitive as it improved processes, invested in new machinery and provided the consumer with a fabulous new product at a constantly lower price.
I highly recommend these novels especially if you are a gifted and talented teacher in our public school system. Many of the traits of those adolescents who are sometimes way beyond their peers in intelligence, in energy, and in drive can be seen in Thomas Edison. Encourage the Tom Edison’s of the world to reach their potential.

A highly readable set of books that I enjoyed tremendously.

Thomas Edison: The Inventor and Industrialist.