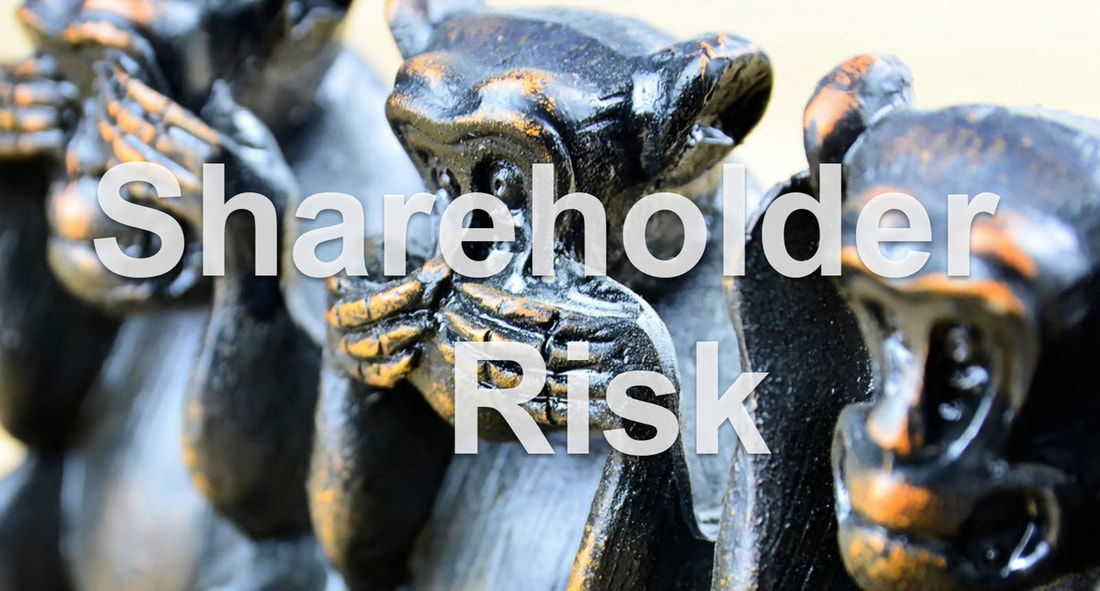 "​We are responsible to more than sixteen hundred stockholders—men, women and children—who are scattered over the civilized world. It is their money we are spending. Not mine, nor yours. It is the money, in many cases, belonging to widows and orphans; so, we have to deal with it in a serious and honest way.

"When we do not put up the best we have against that money which they have entrusted to us, we are not playing a fair and honest game."
​Thomas J. Watson Sr., One Hundred Percent Club, 1926
Evaluating IBM Shareholder Risk
Balancing Risk vs. Reward Is a Basic Investment Decision
​In addition to these subpar returns, there is a new, ever-growing risk: shareholder equity less goodwill (and shareholder equity less all intangible assets). This risk is exaggerated at IBM because of the corporation’s: (1) opaque handling of the successes and failures of its 207 acquisitions since 2001 and (2) inability to retain or make more productive the best-of-the-best of these acquired human assets. This means that IBM’s executive team has suffered the on-going loss of what financial analysts consider “intangible” assets.
IBM for almost two decades has been suffering continual losses of its most valuable, intangible asset: its human assets. Too many analysts downplay this trend not only at IBM but within the knowledge industry in general because, to them, human assets were once intangible; but because of an accounting change in 2001, these "assets" are now quite tangible and quite visible to anyone who cares to look.
​
As part of IBM's total assets, they are what is referred to as goodwill!
Understanding the Risk in Shareholders’ Equity Less Goodwill
An intangible asset is something that, if dropped on your toe, doesn’t leave a mark. Its value is open to personal interpretation, imagination, and creative thinking. For the purposes of this article, intangible assets are considered in two ways: first, the goodwill that arises from an acquisition; and second, all other intangible assets—such as patents, brand image, customer relations, non-binding contracts, and strategic alliances.

​Goodwill is the difference between the full amount paid for an acquisition, less all other tangible and intangible assets.
Of the $92 billion paid for its 207 acquisitions since 2001 [detail is here], $64 billion was carried as goodwill—70% of all acquisition dollars. This goodwill carries no inherent value and, in a worst-case scenario such as bankruptcy, it would have little or no monetary worth.
Shareholders’ Equity Less Goodwill Is Significantly Negative
The dropping value of IBM’s tangible (hard) assets and the growth of one intangible asset—goodwill—has affected shareholders’ equity (an investor’s claim on assets after all liabilities have been paid). Shareholders’ equity less goodwill turned negative in 2008 and has continued downward.

Goodwill may not hurt when it is dropped on your toe, but if you own a corporate stock that suffers the impact of a goodwill impairment (a corporation’s acknowledgement that an acquisition did not yield the expected return and writes off the worthless goodwill), it will hurt your investment portfolio when it is dropped off the books.
How a 21st Century Goodwill "Asset" Goes Bad
IBM’s chief executives have positioned their acquisition/divestiture strategy as the exchange of lower-value products for those of higher value in higher-value markets. In other words, they are pursuing a perfectly balanced, profit-only-driven, product portfolio. ​To supposedly achieve this goal, its chief executives have: (1) sacrificed $23 billion in tangible hardware and software assets (such as the x86-Server Division, Lotus and WebSphere) since 2001, (2) discarded $50 billion in revenue since 2011, and (3) spent $91.3 billion on acquisitions in the last two decades.
​The amount of stakeholder money invested in these acquisitions dictates discussion and dialog not annual reports filled with executive escape clauses.

Arvind Krishna inherited much of this goodwill from his predecessors but, now, he owns the goodwill and must either account for it or pass it on in what resembles a high-stakes game of hot potato. The on-going executive officers' failure to address this ever-increasing shareholder risk is not playing a “fair and honest game” with their investor’s livelihoods and, although the owners of IBM’s stock are no longer widows and orphans, the stock is the financial base of many pensioners and 401(k) investors that, in failing to act on risks in a timely manner with incremental goodwill impairments, could impact the futures of both old and new generations.

From IBM there has been only silence for too long. Since 2001 goodwill has been a growing industry problem, and IBM is the industry’s poster child for bad behavior. To believe that every one of its monthly acquisitions for the last twenty years has been handled appropriately and still retain their goodwill valuation, some of which was assigned almost two decades ago, breaches the boundaries of the believable and credible.

​The executives of the corporation seem to deem it better to remain dense, silent and opaque rather than shining a light into the darkness. As a result, IBM’s goodwill by being too much of a good thing wrapped for too long in too little transparency should be regarded as an exposure to a significant goodwill impairment.

IBM’s goodwill smells rank: it is goodwill gone bad.
IBM’s "Drill Presses" Are Growing Legs and Walking out the Door
The oxymoron—bad goodwill—may only become more prevalent within the high-tech and knowledge industries as the century progresses. When a high-tech corporation takes a goodwill impairment, it should be asked if its leadership understood that the success of their acquisition depended on integrating the knowledge and expanding the productivity of the acquired workers.
Shareholders investing in a manufacturing concern expect the executive team to care for its material assets. An on-going loss of manufacturing assets is the sign of an incompetent management team. Bookkeepers see red when a tool—such as a drill press that is purchased to get a job done—suddenly disappears because of theft or poor maintenance. If a manufacturing executive tried to explain away decades of such losses, the chief executive would be the first to ask emphatically, “What! Did the drill presses grow legs and walk out the door?" or "Did you not hear the bearings squeaking from the lack of maintenance?”

IBM’s dropping sales and profit productivity is a result of the later—the lack of proper lubricants to maintain and improve employee productivity. In the case of the former, each of IBM’s fastest growing intangible assets came fitted with a pair of legs and a quite elegant, functional brain that serves double duty as a smoke detector. More and more often these brains are telling their owner’s legs to evacuate the premise before the corporate building collapses upon itself. Figuratively, IBM’s drill presses—the people the company purchased through 207 acquisitions to get a job done—are walking out its exit doors on their own volition.

Financial analysts that cover the knowledge industry should be seeing red when human assets that are acquired at a premium are misused, discarded, or lost through poor human relations practices. Failing to acknowledge this red ink on a timely basis, if not an accounting mistake, is an ethical lapse that exposes an investor to long-term, unnecessary financial risks.

In IBM's case, the risk is called: A Negative Shareholder Equity Less Goodwill.
Without Fundamental Change, IBM’s Current Decline Will Continue
These goodwill impairments will reveal to the chief financial officers in the knowledge industry something that has been intuitively obvious to their manufacturing counterparts for over a century: (1) warehouses, even virtual warehouses, need to be continually refreshed and refilled with new products of significantly higher value, not filled with the stale vestiges of value remaining from yesteryear; (2) manufacturing facilities, especially virtual, high-tech manufacturing facilities distributed worldwide in home offices, need human assets that are self-motivated, creative, engaged, and passionate about their work; (3) intangible human assets, like their tangible counterparts, need investment and on-going maintenance to perform their jobs and to achieve their estimated goodwill value; and finally, (4) the business must first invest in making people more productive, processes more effective, and products more valuable, before exchanging one form of paper—greenbacks—for another form of paper through stock buybacks.

To Drucker's credit, the twenty-first century growth of goodwill in the knowledge industry is documenting his twentieth century assertion of the growing value of human assets to a corporation. The disregard IBM’s chief executives have shown in valuing, retaining and making these assets more productive demonstrates how they have lost touch with their corporation’s institutional memory: they no longer understand the essence of the most basic of human financial equations—that an enthusiastic, engaged and passionate employee is a productive employee.

As a result, factor into your investments a significant goodwill impairment at IBM. It is just a matter of time and transparency, or one triggering event that the board of directors should ensure comes sooner rather than later along with a change of direction and leadership.

The Kyndryl divestiture may force this decision.